﻿ ﻿As you may have read, MAB and I went to Japan November last year. One of the quirks in Japan is that they sell area specialty junk food. Especially Kit Kat – did you know that they have released over 200 different flavours of Kit Kat in Japan? Their list of current area specialty can be found at http://d.nestle.jp/kitkat/omiyage/ (Japanese). These Japan-only Kit Kat comes in handy for souvenirs, so naturally I filled up my hand carry with heaps of them (no thanks to MAB – he was eyeing at me funny when I was grabbing them at Shinkansen train station platforms). These 6 below are the remainders of what has been handed out: 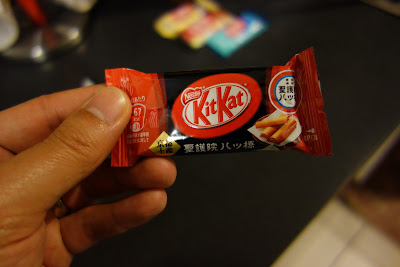 Kyoto Cinnamon cookies were big in Kyoto – we saw them everywhere in Kyoto in their curved rectangular form. So it’s no surprise that Kit Kat has a flavour to reflect this Kyoto specialty.
I found that the cinnamon goes very well with the wafer. Nice smell of cinnamon. 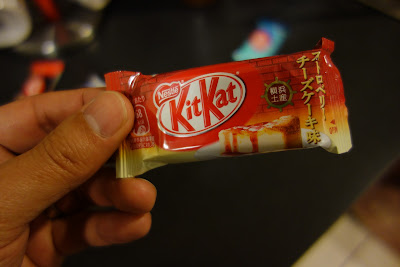 It tastes more like strawberry yoghurt (like, you know, those yoghurt coated nuts) than strawberry cheesecake. The name is very deceptive. 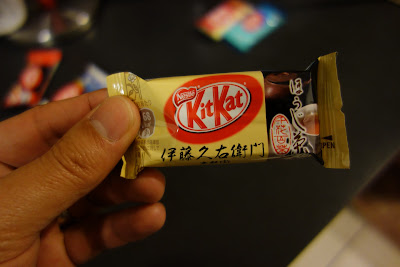 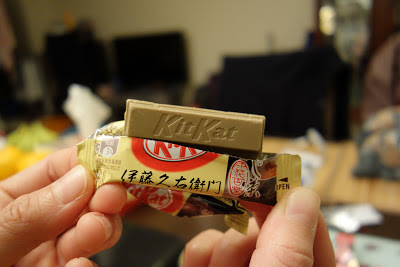 Apparently Kit Kat paired up with one of the famous Tea Shops in Kyoto, which is why it is a Kyoto specialty. Check out the poo-colour coating!

The Kit Kat has the burnt/smoky taste of Hoji Tea, but none of the tea flavour. A bit disappointing. 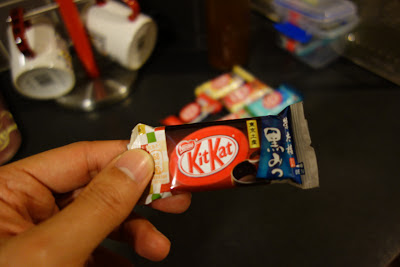 The Kit Kat is very syrup-y. It actually reminds me of cane juice, veering towards Chinese herbal medicine where they have a bit of sweetness. Not a good memory… MAB finds it too sweet for his liking. 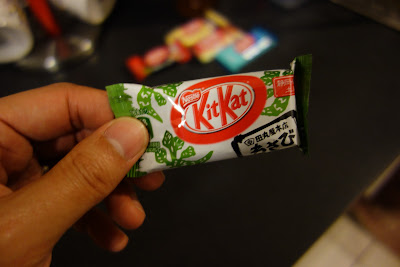 No brownie points for guessing that there’s a wasabi flavour. Japanese people probably use wasabi like Chinese people use soy sauce – goes well with a lot of food. Shizuoka is not far off from Mt Fuji, and is a tea growing area like Uji in Kyoto.

It smells like wasabi but just when I expect a spicy flavour to hit my mouth, throat and nose, instead I get white chocolate sweetness. Very weird… But MAB likes the fact that the wasabi is not overpowering. 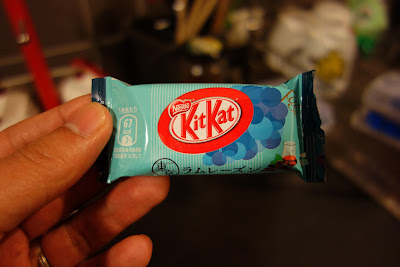 Just like the strawberry cheesecake, I’m not too sure what the association is between rum & raisin and Tokyo. According to Kit Kat’s website, rum & raisin oozes out the feeling of ‘fashion’ and ‘luxury sophistication’ of Tokyo. OK…

Verdict:
Qoo01 and MAB have very different tastebuds.
Posted by MAB vs Food at 22:48