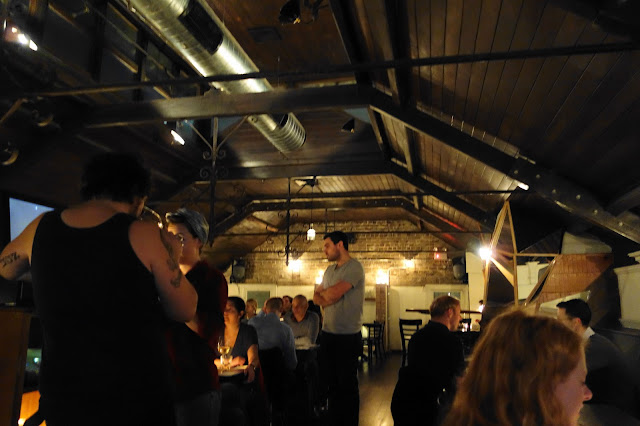 Mary’s is the talk of the (New)town! Mary’s is a new bar in an unassuming location off King St in Newtown (6 Mary St) that has only been opened for a few months. The word is that Mary’s do the best burger in town (according to Timeout Magazine). They also serve awesome fried chicken.  If you don’t know what you are looking for, you will probably walk straight past it. It’s next to Kelly’s on King and all you will see is a graffitied door – there is no signage. Or you can follow everyone else on Mary St because chances are they are heading for Mary’s.

The other thing that has caught attention of many including myself is that there are some pretty big names. Jake Smyth (ex-Bodega) and Kenny Graham (ex-Gardel’s bar at Porteno) own the place. And Luke Powell, ex-head chef at Tetsuya’s is in charge of the kitchen. From fine dining to fried chicken and burgers, that’s quite a change!

My wife ordered the Shroom burger, which came with a side of fries. Instead of a beef patty, you get a large slippery field mushroom that has been grilled. The flavours in this burger are just great. As my wife says, it brought her back to her childhood when she used to go to Macca’s and have cheeseburgers and French fries (before she turned her back on meat and became vegetarian), in a good way! The shiny bun was so soft and fluffy, slightly sweet and buttery. And the cheese was nicely melted onto the mushroom. And then there was the tasty special sauce that goes oh so well with the shroom and the melted cheese.

I had the fried chicken and opted for the half chicken on this occasion (obviously). Mary’s also comes through in the clutch like Larry Bird with 2 whole birds for larger groups. And did this fried chicken deliver! Like a thunderous slam dunk (maybe not from Larry Legend, but LeBron James)! The batter was nice and thin and well spiced. And the chicken was so tender, moist and juicy. The type of chicken that I want to get my hands straight into and greasy for. You can also dunk your pieces of chicken in the mash and gravy, which I didn’t order this time but I hear is awesome, or more spice from the Tabasco sauce in the Jack Daniel bottles. The best way to describe the experience is that it is like Hot and Spicy from KFC except infinitely better!

Highlight: Wonderful wonderful fried chicken
Lowlight:  The burger is not big, the size of a Macca’s cheeseburger
Overall: Whilst Mary’s is a bit run down,  quite dark and the music has been cranked up to full volume,  the vibe here is great  – it’s grungy, cool, and down to earth ! Mary’s is a great place to catch up with friends, have a few drinks and enjoy a (much more sophisticated) Macca’s meets KFC extravaganza! 7/10 (Great)