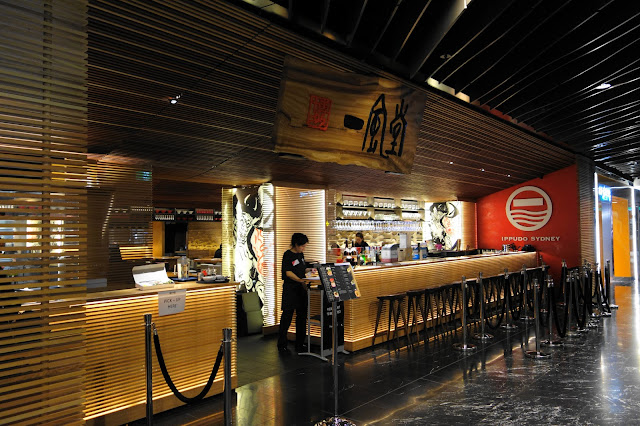 Ippudo is that popular Japanese ramen chain that can be found on Level 5 food court of Westfield Sydney CBD in Pitt St Mall. Ippudo also has locations in Japan, Malaysia, Singapore, New York, South Korea, Hong Kong, China and Taiwan, so they have developed a reputation around the world for quality ramen and pork buns, both of which are items that I will be commenting on today.

﻿﻿
I hear a lot of comparisons to the legendary Momofuku pork bun. I have to say that the Ippudo bun is nowhere near as good as the Momofuku pork bun. I have had the Ippudo pork bun on a number of occasions now and am always not 100% satisfied with it (except the first time I had it not long after Ippudo's opening). I find the bun to be a bit inconsistent. Although the bun is soft (not as pillow soft as the Momofuku pork bun), the bun is always a bit soggy at the base from excess moisture (though not as bad as steamed buns at yum cha that have been left out for too long), which for me ruins the bun's texture. The flavours of the pork bun are quite enjoyable though. The pork is so tender it melts in your mouth. The sauce, which is a creamy Japanese mayo with a hint of spice go very nicely with the pork. But I definitely would have liked more pork. There just didn’t seem to be much of it at all! So overall, I am going to go against the popular view amongst foodies and say that the Ippudo bun is good but not a big hit for me.
Now to the hero of Ippudo: ramen! My favourite bowl of ramen at Ippudo is the Akamaru Shinaji with extra egg. This one comes with thin noodles, pork belly, black mushrooms in an original tonkotsu broth with a special blended miso paste and fragrant garlic oil. I am going to compare this bowl of ramen to Gumshara (here's my review) because they are my 2 favourite places to get ramen in Sydney at the moment.
The broth is really quite tasty; it is much lighter than the broth at Gumshara and less porky in flavour. The garlic oil and miso really do enhance the flavour of the broth. It’s a matter of personal preference with the broths at Ippudo or Gumshara, but I would go for the artery clogging broth at Gumshara due to the intensity of the pork flavour. Ippudo does do a much more accessible broth as it is much lighter and won’t make you feel as bloated.

I am a big fan of the thin ramen noodles. I like how you get to choose the ‘hardness’ of the noodles at Ippudo. I love my noodles bouncy so I ask for my noodles to be hard / al dente (or whatever you want to call springy noodles). I actually prefer these thin style of noodles to the usual ramen noodles served at Gumshara and other ramen stores.

The slices of pork belly were a joy to eat as the meat was fatty, tender, succulent and melted in the mouth. I think I like the pork slices here more than Gumshara.

The boiled egg was soy flavoured and inside was warm, gooey yolk although I think I like Gumshara’s a little bit more as the egg was softer.

In terms of value, Ippudo is relatively pricey (Akamaru Shinaji with extra egg costs $18). A similar bowl of ramen at Gumshara is around $13.
In summary, here’s how Ippudo and Gumshara compared for different elements and which one I thought was better:

So which ramen do I prefer? It’s a close one as I prefer different aspects in each one, but I would have to give the slight edge to Gumshara due to Gumshara being the better value for money out of  2 great bowls of ramen. I would happily order both bowls of ramen again and again though.
Verdict
Highlight: Ramen of course. Excellent thin, springy noodles and light, tasty tonkotsu broth.
Lowlight: Pricey. No vegetarian options for ramen as broths are pork based.
Overall: Ippudo is a good restaurant that has great décor and a buzzing atmosphere.  They serve satisfying bowls of ramen at a premium price. 6.5/10 (Good)