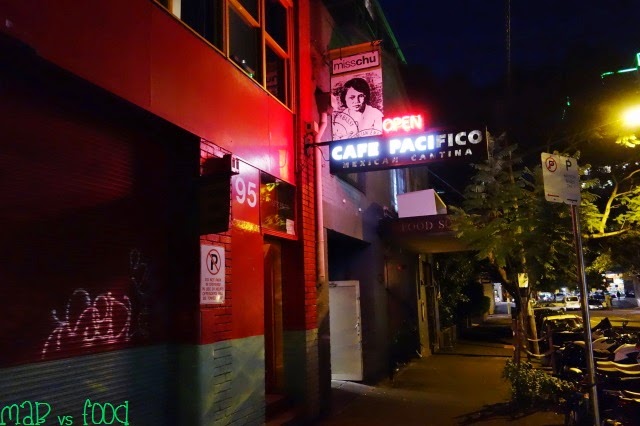 A meal at Cafe Paci has been a long time coming for me, since August last year to be precise. This was when Pasi Petanen left Marque, where he was Mark Best's head chef, to open his own restaurant for the first time. Call me a fanatic, but I view head chefs a bit like rock stars: I follow their restaurants, changes in menu and their movements with close interest. So as soon as I heard the news that Pasi Petanen was opening Cafe Paci, Cafe Paci went straight to the top of my wish list. Despite my best efforts, it wasn't until now did I get a chance to eat at Cafe Paci (although I did try a few of their courses at Sixpenny and Co).

﻿
Cafe Paci is a pop up restaurant that has a 12 month lease in its current location, with an option to extend for a further 6 months, which has since been exercised. This means that Cafe Paci will only be around til January 2015.

Cafe Paci occupies the site that was previously Cafe Pacifico, a Mexican cantina (Pasi has simply dropped 'fico' and made it his own). Pasi has mostly left the existing establishment as it is; the main change being the dining room has been given a new lick of paint, transforming the previous red and green colour scheme to just grey. The setting at Cafe Paci is a complete contrast to the elegant, fine dining ambience that was found at Marque, from the drab flight of stairs that you negotiate to get to the restaurant, to the sticky tables, and the curtains that separated the dining room from the kitchen and bathrooms.

﻿
Cafe Paci offers a seasonal tasting menu of various snacks and 5 courses for $85 per person. The menu just lists the ingredients in each course but there are waiters on hand to explain each dish in intricate detail. The courses are creative, playful and contain elements of Pasi's Finnish heritage. The dishes do sound a bit odd at first, but you will soon find out that there is a "method to his madness", so to speak.

Tonight I was dining out with my wife, a vegetarian and my friend, a pescetarian. Cafe Paci offers an alternative vegetarian menu, so there were no problems with catering for the dietary requirements.

The meal at Cafe Paci starts with a series of snacks. In the foreground was a quail egg coated in a umami-licious green powder of wakame and cavolo nero. In the centre were 'chips and dips': crispy fried brussel sprout leaves which were used to scoop up an oyster cream (sour cream for the vegetarian). And hanging out back was a pear sandwich with French cheese and dusted with cinnamon.


The other snacks were great, but the snack that stole the show was this rye taco, a tribute to the previous tenants of this site. There is very little Mexican about this taco; it's clear that the Finns have moved in. Inspired by a Finnish pastry, the filling of sticky rice, egg butter, sour onions and chives was wonderfully gooey, creamy, buttery and damn tasty.
Bread


Bread at Cafe Paci is a Finnish bread made with potato, rye and caraway and coated in molasses. There is no yeast in this bread and the potato is allowed to ferment with the rye for 3 days. This bread, quite simply, is incredible. I enjoyed the interplay between the slight bitterness in the crust, the sweetness of the molasses and the nutty and malty flavour of the rye bread. As amazing as this bread was, it's quite filling. Knowing that there was still a full tasting menu to come, we declined the tempting offer to have more bread.
Course one
﻿

My first course consisted on a pile of hand picked mud crab meat mixed with crab custard, pomelo, dill and finished with a dusting of vadouvan. The delicate flavours of the mud crab were allowed to shine in this dish with the subdued acidity of the pomelo and the gentle spices from the vadouvan. This was an excellent first course as it was light, refreshing and left my taste buds salivating for more.


In place of crab and crab custard, my wife's vegetarian course was given butter beans and corn. This course utilized similar flavour profiles to my first course, but also had more of a sour flavour note.
Course two
﻿

The shredded duck reminded me of duck rillettes except Cafe Paci serves theirs with fresh, crispy slices kohlrabi. The use of kolhrabi was interesting; its flavour being something between turnip and radish. And the kohlrabi was smoked with hickory wood. There was also a quenelle of cider vinegar cream to the side to cut through the richness of the duck. However the flavours in this dish didn't excite me as much as the other courses, a view that was reconfirmed when I had a taste of the vegetarian version.
The vegetarian course, on the other hand, was spectacular. Instead of duck rillettes, the vegetarian got mushrooms and hazelnuts. The flavour of the mushrooms blew me away, and made me momentarily wish I was a vegetarian (I can't believe I just said that).
Course three
﻿

Looking at the list of ingredients, you wouldn't have guessed that this dish was Pasi's take on spaghetti and pesto. Pasta was made from cabbage cooked in butter, and then cut into spaghetti-like strips. A sort of pesto sauce was created from anchovy juices, mullet roe and parsley purée. The only thing conventional about this spaghetti and pasta was that it was topped with some grated parmesan. This dish might sound crazy, but the flavours of this dish are crazy good. I particularly enjoyed the fishiness and saltiness of the anchovy. And nothing goes better with fish than lemon, which came in the form of a purée.
The vegetarian version came with buddha's hand instead of anchovy. Buddha's hand is an unusual citrus fruit that is mostly rind, which was used to give the dish some more zestiness.
Course four
﻿

Ah Photato, we meet again. I have fond memories of Photato at my meal at Sixpenny and Co last year. Photato is Pasi's fun, contemporary take on the Vietnamese dish, beef pho. Again I was impressed by pretty much everything about this dish: the concept, the creativity, the presentation and of course the amazing flavours! This tasted just as good as the first time.
Blanketing the plate was a thin slice of wagyu beef lightly seared on one side (for just  5 seconds according to our waiter). The flavour of this beef was amazing and the meat just melted in the mouth!
Hiding underneath the wagyu were potato noodles that were cooked in garlic butter. I loved, loved, (did I say, loved) these noodles! The noodles were thin and reminiscent of vermicelli in appearance. But the noodles had a nice crispy texture and were insanely addictive.
This dish also came with crispy fried garlic chips; strands of enoki mushrooms; watercress leaves; grated horseradish; and a wedge of grilled lemon for acidity.


My wife's last savoury course was a pear cooked in bay leaves, topped with slices of turnip and grated horseradish, and served on a bed of onion puree. This was also a dish that we had enjoyed before at Sixpenny and Co. The pear had great caramelised flavours and a little crispness to it. The heat of the horseradish was subtle and worked surprisingly well with the pear and the onion purée.
Cheese course
﻿

After the savoury courses, we decided to share the optional cheese course. At Cafe Paci, this was not going to be a cheese platter with dried fruits; Pasi just has to put his own spin on things. This cheese course came with light whisps of Monte Veronese di Malga cheese,  served with onion cooked in pear juice, freeze dried pears and crispy buckwheat crackers. I am not much of a cheese person normally so I certainly welcomed a reinvented cheese course although the cheese purist at our table was not as keen. The sharpness of the Monte Veronese was a great match with the sweetness of the pear and the onion.
Pre-dessert
﻿

Looking more like a poached egg than a pre dessert, our next course consisted of a yoghurt mousse, encasing a ball of carrot sorbet and a bottom layer of licorice cake. This was an incredibly clever dish that had the entire table in raptures. Such a beautiful transition from savouries to dessert: it was light, refreshing and the flavours were just gorgeous! The yoghurt mousse was so light and airy that it evaporated in the mouth. The carrot sorbet was refreshing, earthy and slightly sweet. Although licorice is not normally my cup of tea, the aniseed flavour was quite pleasant; not overpowering and working harmoniously with the other components.
Course five
﻿

Dessert course was a quenelle of rye ice cream, served with apples and topped with an assortment of cocoa nibs, malt nougatine and white beer wafers. I enjoyed all the different textures with the ice cream. And I love rye with chocolate in desserts since it reminds me of the malty flavours of Milo.
Petit fours
﻿

After dessert, we were served a ball of fairy floss topped with bits of popcorn. We were instructed to pull apart the fairy floss with our fingers. We got popcorn all over the table, but we were having too much fun to notice or care. I do enjoy buttery popcorn and spun sugar, so this little snack went down a treat!


Cafe Paci strangely enough serves pork crackling as a petit four (or not, given oddity is Cafe Paci's forte). The pork crackling was coated in dark chocolate and sprinkled with candied fennel seeds. This bizarre combination actually tasted quite nice.
The vegetarian petit four was Cafe Paci's version of Caramello Koala: how cute! The koala was made of dark chocolate and had a delicious, flowing eucalyptus caramel centre.


It's a shame that Cafe Paci is a pop up restaurant. It's refreshing to see a restaurant be creative and push the boundaries without creating offputting flavours, which I have sometimes seen in "modern / contemporary" restaurants. And at $85, a meal here is great value for the high quality of food that you get (there is also a $45 lunch set menu available on Fridays). I am definitely keen to have another meal before Cafe Paci closes.
Verdict
Highlight: Photato is just as good as I remember it, but I think I have a new favourite dish at Cafe Paci: yoghurt, carrot and licorice.
Lowlight: Cafe Paci closes in January 2015, so the clock is ticking.
Overall: Cafe Paci provides Pasi Petanen with a platform to showcase flair and creativity in his cooking. A meal at Cafe Paci is fun and your taste buds will be in for an exciting ride, so make sure you don't miss out on a chance to eat here before it closes. 8/10 (Excellent) 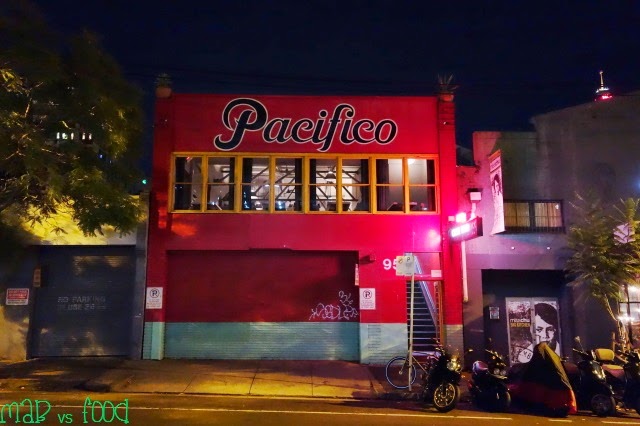