Biota Dining has probably been the restaurant that I have most wanted to dine at for a long time. Last year I had a taste of what Biota has to offer at Land vs Sea, a meal where Alessandro Pavoni of Ormeggio collaborated with Biota owner and executive chef, James Viles to produce a wonderful 4 course tasting menu. I have also seen Biota at food festivals like Taste of Sydney and Sydney Cellar Door. But I have never had the chance to actually eat at the restaurant, seeing as it's located in Bowral. So what better way is there to celebrate my wife's birthday and to cap off our weekend getaway than to drop by Biota for lunch on the way back to Sydney from Canberra? This meal was booked months in advance so this was one of the most highly anticipated meals I've had, so expectations were rather high.

Biota may only have been open since 2011, but it has received its fair share of awards and accolades. Biota has received 2 chef hats from the SMH Good Food Guide for the last 2 years. It also won Best Regional Restaurant Award in the 2014 Guide and the Sustainability Award in the 2013 guide.


The words that probably best describe James Viles' philosophy at Biota are: local produce driven; seasonality, and sustainability. Viles grew up on a farm in the Southern Highlands so these things have always been apart of him. However interestingly before opening Biota, he was heading up large kitchens at hotels in Asia and the Middle East. He said that he had zero connection with where the food he was serving came from as ordering stock involved clicking buttons on a computer screen as opposed to talking to local producers.

It is his time in the Middle East which fueled his desire to return to Australia and open a restaurant like Biota. Biota is set on a large block of land complete with a kitchen garden and onsite greenhouse, where they grow their own flowers, herbs and veggies, picked just before service. Much like at Tyler's Pantry where we dined at 2 nights ago (who sources most of their produce locally in the South Coast), Biota too sources about 60% of its ingredients locally from the Southern Highlands area and the remainder is sourced within Australian borders. Biota also forage the local mountains, forests and streams for mushrooms and other native plants.


The dining room has a distinctly Scandinavian feel, with its minimalist decor and touches of green and wood. We were lucky enough to be given the best seat in the house, right in front of the open kitchen, where we could watch the chefs cooking the meals, and James Viles and his team meticulously plate up each dish with intricate precision. Even the private dining room at the back gets its own TV screen so they don’t miss out on any of the action on the pass. The kitchen operated like clockwork, very orderly, and quiet with just a simple clap from James to let the wait staff know when a course was ready to be taken out to the diner. 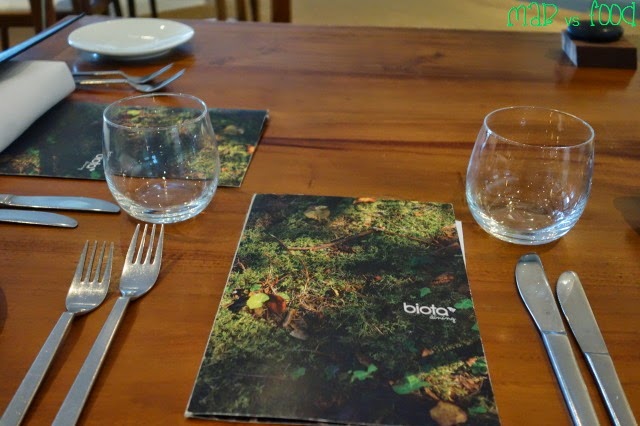 You can choose a 3 course a la carte menu or a set course menu of either 5 courses ($98) or 9 courses ($150). As Biota is not able to cater for vegetarians in their 9 course menu, we decided to have the 5 course menu.

To start off proceedings, our waiter brings out a little snack, a slice of ocean trout jerky on a stick set to a slab of pink salt. The trout jerky was sprinkled with lime salt, giving the jerky a nice hint of citrus to go with the smoky, salty flavours. This was probably the best jerky I have ever eaten, and I would happily snack on a bagful of these.


My wife was given a little snack of mixed bread and grains with apple jelly and berries. The apple jelly was particularly pleasant - sweet and slightly tart.

Snacks were then quickly followed up with A piping hot mini loaf of house made whole wheat sourdough bread, along with house churned smoked butter. As expected from a restaurant like Biota, both the bread and butter were very good. I did enjoy the unusual presentation of the butter on a stone, but it was probably not the most practical given that we knocked the butter onto the table at least once. But we did quickly retrieve it, so it's safe to eat, right? I think the three second rule applies here in any case...

My first course was probably my favourite of the day. Beneath shards of vegetable charcoal and sprigs of purslane, lay a sashimi scampi and a creamy smoked roe salad. The star of this dish was certainly the scampi, beautifully fresh, sweet and having a lovely texture. I thought the charcoal flakes were interesting; it added some crunch to the dish and was a nice textural contrast to the rest of the dish. I also thought there was good restraint shown in the use of smokey flavours from the charcoal, charred leek and smoked roe - it was pleasant without being too overpowering for the fresh, delicate flavours of the scampi.

My wife's vegetarian course looked almost identical in presentation. In place of scampi and smoked roe, my wife's dish had cucumber and feijoa. She also loved the first course, so it seems the vegetarian version was just as successful. Feijoa is a fruit that we both have not tried before. It is usually found in South America or New Zealand but Biota sources theirs locally. The flavour of the feijoa was just incredible and one that we won't be forgetting for a while. It was a bit like a guava, wonderfully sweet and aromatic.

Both of our second courses consisted of a silky sheet of pasta blanketing over cooked curds, with a lightly cured egg yolk and rye crumbs. There is something exhilarating for me about piercing a warm egg yolk, letting it ooze over silky smooth pasta and then digging in. The cooked curds were soft, creamy and a lot like ricotta. The rye crumbs were crispy and provided texture to the dish. There was also a sprinkling of ash to add a bit of smokiness. I was also given a slice of bottarga (pressed and cured trout roe). The flavours and textures in this dish are just heavenly. Another star dish!

My third course was lamb breast, with fresh and cooked oats, and torn sheets of dried lactose. The lamb breast was beautifully cooked and flavoursome and the lamb jus was incredibly delicious. Please give me a pitcher full of this next time, so I can smother the lamb in it hehe! Both the dried lactose and the cooked oats were surprising elements that I thought worked quite well in this dish; it made the dish more interesting by giving it a variety of textures. The sheets of dried lactose were thin and crisp with a slight milky and sweet flavour. The cooked oats were cooked with sheep milk curds, giving it a creamy and slightly sticky texture similar to porridge. I love porridge especially when it's cold, so I enjoyed the cooked oats.


My wife's third course was an onion broth with grilled onions, thin slices of potato, buttermilk and nasturtium. The onion broth was light, clean and had a wonderful depth of flavour. This was paired well with the smokiness of the grilled onions and the potato; and the soft curds of buttermilk. The only thing missing from this dish I feel was something crispy for texture.

My last savoury course was Burrawang duck, paired with cauliflower foam, white raisins and pear. The duck was well cooked: tender and slightly pink;  the duck was served with a rich, flavoursome jus. The sweetness of white raisins and pear are the perfect accompaniment to balance the richness of the duck. Cauliflower was served two ways: as pickled paper thin slices to add acidity to the dish and as a foam, which was wonderfully creamy yet light. And there were strands of pine needles, which looked quite stunning on the plate and fitted in nicely with the restaurant's philosophy, were a bit prickly.  Although this was a very good course, this was probably the course that excited me the least. The other dishes were just that spectacular.


The star of my wife's last savoury course was beetroots, which happened to be one of our favourite vegetables to cook and eat. We just can't get enough of those delicious ruby globes with its wonderful sweet and earthy flavours. And how were the charred beetroots? AMAZING! Quite possibly the best beetroots we have ever eaten. I don't know how Biota can get so much flavour from a humble vegetable. There were also peelings of fresh beetroots and puffed grains which were good textural contrasts to the tender and juicy beetroots. And the tartness of the bright pink yoghurt was a nice pairing with the sweet and earthy beetroots. What a brilliant vegetarian course to end the savoury offerings for the day. Watching my wife devour this course filled me with envy.

And for our last course, we had Biota's signature dessert, mum's roses. This course is served differently depending on what stone fruits are in season. For us, we received a dessert centred around peaches. Peaches were prepared in 3 ways: as a peach sorbet, a poached peach and a peach gel. Each preparation may have provided something different but they all had something in common: they each tasted sublime! To the side of the peaches there was also a quenelle of vanilla cream, which always goes well with fruit but this vanilla cream was light and fluffy like a cloud.

Rose meringue covered the dessert like powdered white snow. The rose meringue was made with liquid nitrogen so the plate came out with mists and vapours. The rose meringue was crisp and icy cold, so it provided a great texture and a temperature contrast to an already refreshing dish. Perhaps the presentation could have been even more dramatic had the rose meringue been prepared and served at the diner's table rather than in the kitchen, but what a fitting end to a spectacular meal!


And to our finish our wonderful meal, we were served a petit four of dark chocolate with assorted nuts and a nice refreshing pot of darjeeling tea from Le Maison du The. 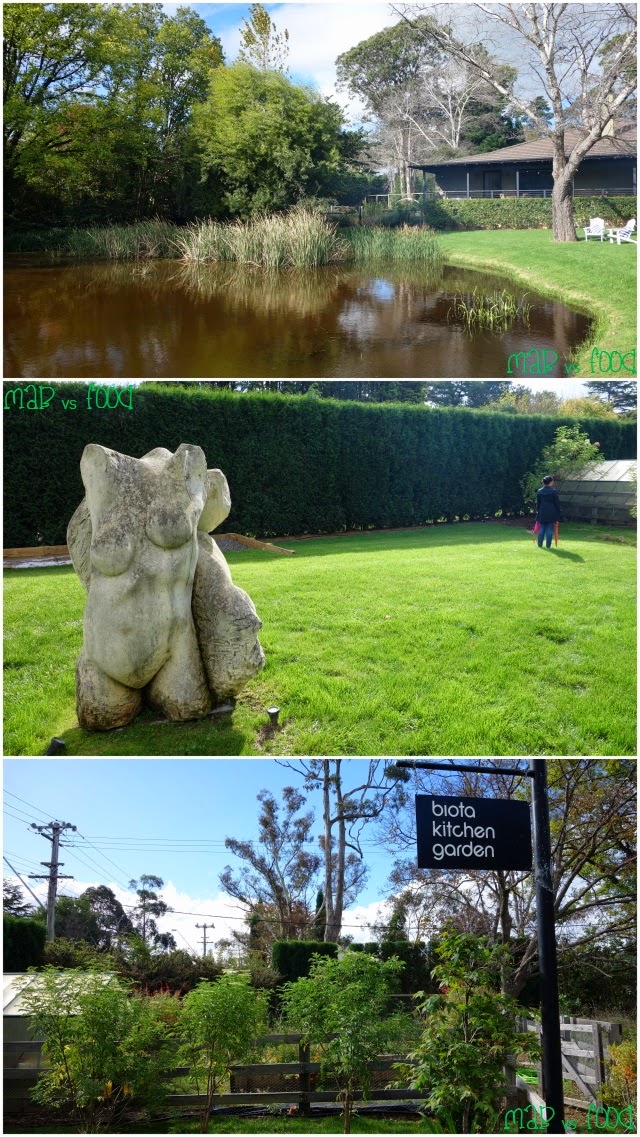 Of course no visit to Biota is complete without a leisurely stroll around the gardens of Biota. Usually there are ducks and geese wandering around the grounds, but they were not to be seen today. I was looking forward to seeing Biota's 2 geese, one named foie and the other gras. I always chuckle when I hear people mention their names.

Slightly dismayed by the lack of foie / gras sighting, my wife and I headed back to Sydney highly satisfied. Biota not only met our lofty expectations, it may have even exceeded them. The food was of a high standard and we thoroughly enjoyed each course. We were also very well looked after by the wait staff, who were friendly, attentive and knowledgeable. Thanks Biota, you guys made my wife's birthday a very special day indeed and we will always have fond memories of the amazing meal we had here!

Verdict
Highlight: Too many to chose from. But if I had to narrow it down, the scampi dish, the egg yolk and pasta dish and the beetroot dish were the most memorable.
Lowlight: There was no sighting of Biota's local residents, foie and gras.
Overall: Biota is an embodiment of James Viles philosophy with food. The menu is focused on local produce, seasonality and sustainability. The food is simply brilliant with inspired pairings of different flavours and textures. Biota deserves every single one of its two hats. 8.5/10 (Excellent) 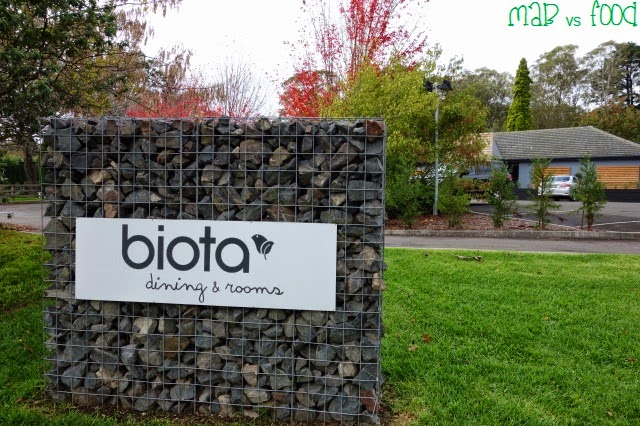