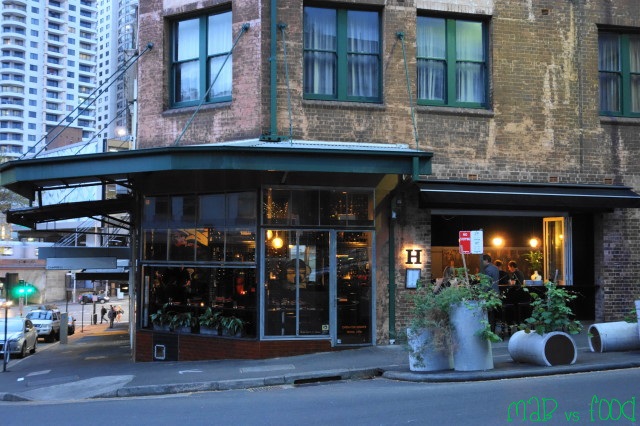 This week saw the Logies of the Sydney dining scene, the SMH Good Food Guide (GFG) 2014 awards night, come and go. I always follow the awards night quite closely by getting regular updates from their Twitter feed.  All the different food awards (Michelin, San Pellegrino world best restaurants etc.) intrigue me, in particular seeing who the winners and losers are. There was certainly a lot of blood spilt in this year’s GFG awards, most notably Est. and Marque, who both lost their 3rd hat. Of course there were winners too with Guillaume Brahimi being the biggest winner on the night as he was the recipient of the Legends Award and his restaurant Guillaume at Bennelong, which will be closing in a matter of months, won a coveted 3rd chef hat.
The other big winner of the night was Mr Wong, who were awarded the Best New Restaurant and two-chef hats in its first year. Which brings me to my thought of the day: How do Sydney’s Chinese restaurants fare compare to the rest of the world? Obviously Sydney is not going to compare to places like Hong Kong, where you will find Tim Ho Wan, which I think is unmatched for quality and value anywhere (I ate there for $A 10 a head, I was stuffed and it was absolutely amazing) or Lung King Heen for their exquisite dumplings in a 3 Michelin star, luxurious setting.
Well, Terry Durack, the chief reviewer of the GFG, believes that Mr Wong has revolutionised Chinese food in the Sydney dining scene. In a video clip in which Terry Durack and Joanna Savill discuss the winners and losers from the awards night (unfortunately this clip has since been taken down), Mr Durack pondered, “Why are all the other Chinese dim sum / yum cha places in Sydney crap (besides Mr Wong)? And why do my siu mai at other places look like they are on steroids?". I am paraphrasing here as I am not able to find exact quote, but he definitely used the words, crap and Chinese, in the same sentence. I am not going to engage in this conversation any further except to say that I certainly don’t agree and he has managed to insult every other Chinese restaurant in Sydney.

Anyway, that was a rather long introduction to my post for today, which is about my visit to Bar H (80 Campbell St, Surry Hills) last night. Bar H serves modern Chinese cuisine and happens to be one of the losers from the GFG awards night, having lost their one chef hat from last year.  Bar H is not your traditional Chinese dim sum place, the closest it comes to this is the Asian guy they’ve employed to wash the dishes. Bar H is kind of a cross between a bar and a restaurant. It’s a cool little space (that seats about 40) where you can enjoy a few drinks and some seriously good food, which are designed to be shared.
One of my favourite things when dining out is the open kitchen and watching the chefs prepare your feast before your very eyes.  At Bar H, you can pull up a bar stool and be seated at the bar counter, which gives you a perfect view of the ‘kitchen’, which is absolutely tiny – probably the smallest kitchen I have seen.  There are just 2 chefs in the kitchen including head chef and Bar H owner, Hamish Ingham (former GFG Young Chef of the Year winner and former head chef at Billy Kwong). It was fascinating watching Hamish Ingham operate his kitchen; it was like clockwork. It was a busy Friday night and the dockets were flying off the table, so the kitchen was under the pump, a small task for the head chef. Hamish is able to multi-task like no other and do what seems like 10 different things, including stir frying, steaming, deep frying, plating up and heck even taking dishes out to customers. I struggle to do more than 2 different things without setting the kitchen on fire, so I was quite impressed.
Tonight I came to Bar H on a Groupon voucher, which entitled us to a banquet menu of 8 tasting plates for just $79 for 2 people (this menu is normally $79 per person, so this was tremendous value). Today I am dining with my brother, Mr AMY, and since my vegetarian partner in crime is not joining me today, we had the normal banquet menu, which didn’t bother me as I was able to get my dose of seafood and meat courses.
It has been a long busy week so I needed something to recalibrate. The Gin Chi, which was a gin with lime, house pandan syrup and sesame leaf, was the perfect drink for this. I really enjoyed this drink as it was zesty, tart and refreshing. So good that I ordered two of these.
Our first plate was the crisp fried oldman salt bush. Having these was like picking leaves off the branch of a tree and eating them. This was a highly enjoyable snack as the leaves were nice and crisp from the thin, light batter that the salt bush had been dunked in before the deep fryer. There was a great kick of heat too from the dusting of Sichuan peppers and from dipping the leaves into that addictive chilli mayo on the side. Now that’s good bush tucker!
One of my favourite yum cha dishes are rice noodle rolls (either steamed or pan fried) and Bar H does a good version of these.  These were pan fried and were crisp on the outside and nice and soft on the inside. The rolls were coated with a delicious thick, syrupy sweet soy, and topped with peanuts and fishy bonito flakes.
This was a simple yet enjoyable salad of fresh cucumbers and crisp black fungi. The soy based dressings that Bar H use in a number of their dishes are so incredibly addictive, so be careful. Otherwise you will find yourself wanting to lick the plate clean. This was a soy dressing with some chilli and shallots.
﻿
﻿
Wontons are another one of my favourites at yum cha. The wontons here are fat, slippery parcels that were quite generously filled with pork and prawn and served swimming in a pool of soy chilli dressing and a sprinkling of pepper on top. This made for some delicious, classic flavour combinations.
The deep fried tofu had a lovely crisp batter and a warm, soft, wobbly inside. I loved the five flavoured sauce. It was not as hot as the previous chilli dressings, but a nice complex flavour profile from the five spices. This sauce is best enjoyed with a bowl of soft, fluffy jasmine rice.
The spatchcock was an impressive dish. The spatchcock meat was moist and succulent. And you can’t go wrong with a good ol’ Cantonese ginger and shallot dressing. I love the combination of soy sauce, shaoxing wine with the freshness and zing of ginger, shallots and coriander. Just so simple, yet works every time.
The caramelised beef short rib was our favourite course of the night. The beef was so nice and tender and full of flavour. The beef was coated in a lovely sticky, sweet caramel sauce and garnished with fresh peppercorns, fresh chilli and mint. Mr AMY commented that he is not normally a fan of beef or big chunks of meat like steak yet this dish just tasted great and was his favourite. That is proof enough to me that this dish was a winner.


The last course of the banquet menu was these housemade sorbets, rhubarb and apple. Both were great but my favourite was the apple. It was just a pleasant sorbet with nice refreshing apple flavour. This would make a perfect palate cleanser.


Our waitress asked us whether we would like to look at the dessert menu and we were happy to take this offer. Despite feeling quite full, we somehow managed to find enough space in our stomachs for more sweet treats. We decided to get the bay leaf custard with caramel. It looked like a simple dessert, but it was so tasty. It was an eggy, creamy custard that made me want to come back for more after each bite. The caramel was quite sweet but was balanced out by its bitterness.


And to finish off a great feast, we also ordered some chocolate truffles that were infused with passionfruit flavour.
Bar H has certainly won me over with its great take on modern Chinese cuisine. I know I will be back at Bar H in the near future so I can try some of those dishes from the a la carte menu that I was watching the chefs prepare through the night. I was salivating at the sight and smell of all those steamed fish with ginger and shallots being prepared. This is my absolute favourite fish dish and I WANT IT! Oh well, there’s always next time…
Verdict
Highlight: I love open kitchens and watching Hamish Ingham crank out all those sharing plates from that tiny kitchen whilst barely breaking a sweat was a spectacle in itself.
Lowlight: Sitting on a bar stool for 2 hours is not the best thing for your back.
Overall: Bar H is a trendy little space that is ideal for a fun night out and catching up with a group of people. There’s a great drinks list, delicious food and the atmosphere is buzzing and casual. Sydney could do with more places like Bar H. 7/10 (Great)