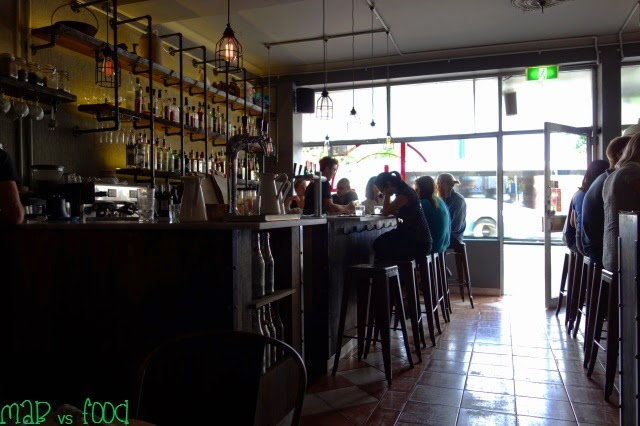 Hartsyard is a restaurant that has been on my wishlist since like forever! Since opening its doors about 2 years, Hartsyard has received a lot of praise and accolades for its share style American cuisine, including a chef hat from the SMH Good Food Guide. Hartsyard is run by the husband-wife team of Gregory Llewellyn, who manages the kitchen, and Naomi Hart, who manages the front of house. As none of the members of EMC2 had dined at Hartsyard, we all decided that this needed to be rectified.

Hartsyard is the kind of restaurant that fits right into hipster Newtown. The dining room is bustling with crowds and full of energy. The lighting is dim and moody. And the music is loud, of course.

The share style menu is divided into seeds, the lighter meals, and feeds, the heavier meals. Virtually everything on the menu is made in-house, from the hot sauce that can be found at every table to the chicken jerky that I munched on as I waited for the rest of dining group to arrive. And much of the vegetables come from their own garden and greenhouse too.


I’ve never had po' boys before but boy were these deliriously good! The English muffins were soft and fluffy on the inside while staying crisp on the outside. Each muffin is filled with deep fried oysters coated in a delightfully crunchy batter and a creamy Old Bay coleslaw that was both creamy and fresh.  It was a good thing I was dining with 4 other people, because I could have easily eaten a whole tray of these! I am sure to return to Hartsyard soon to have more of these oyster po' boys!

A meal at Hartsyard will generally be a big meaty affair, but make sure you don't overlook this gem of a salad, carnivores included! Thin slices of raw mushroom, globe artichoke and celery are beautifully arranged on the plate and dressed in one of the best salad dressings that I have had in a Sydney restaurant for some time. It was creamy, savoury and just downright delicious. It's a dressing that I definitely wish I had the recipe for so I can replicate at home. The salad was also topped with Jerusalem artichoke crisps, Parmesan crisps and black kale.


Duck, duck, duck as the name suggests consisted of 3 different kinds of duck: crumbed and deep fried rillettes, parfait, and shaved foie gras. Encased within each crispy croquette were delicious shreds of soft duck meat, cooked in its fat. The parfait and shaved foie gras elements added a richness to the dish that was well balanced and never overpowering. The combination of mulberry and lemon jam with the richness of duck, duck, duck was a delightful one. Along with the Oyster Po' Boy, this was my favourite dish of the night.


Unfortunately the crispy pig tails were a bit of an anti-climax, coming in after three dishes that have set the bar high. Two crispy croquettes were filled with soft, rich and gelatinous pig tails bits, flavours and textures that I didn't make much of an impression on me. The pig tail croquettes were served with a buttermilk dressing, radish and pickle slices to help cut through the fattiness. We were encouraged by the waitress to eat the croquettes with the housemade hot sauce that can be found at every table. Unfortunately we all forget to take this advice (probably because we were too busy worrying about photographing our food, as shown by the next pic lol).

The ricotta gnudi is one of the latest dishes to be included onto the Hartsyard menu.  The ricotta gnudi were like a softer, creamier version of gnocchi. Butter poached prawns were well cooked: juicy and springy. The gnudi and prawns were swimming in a pool of crab bisque, with its wonderful aroma wafting through the air as soon as the plate hit the dining table. Rounding out the dish were confit tomatoes and grilled fennel. Yet another solid dish!

I am going to start by saying that I don’t remember having pulled pork this good anywhere else in Sydney. If you love pork, just order it! A brick of pulled pork is served with a slab of maple bacon riding on top. The pulled pork was brined and smoked and the smoky flavour from the hickory wood was very prominent. The pulled pork was so soft, falling apart easily with the pull of a fork. And the maple bacon, which was a thick pork belly slice, was to die for! The maple glaze was sweet and sticky; the bacon was deliciously fatty and melted in the mouth. To the side were green apple pieces and yoghurt to provide acidity and tartness to balance the richness of the pork. There were also ultra-crunchy pork rind chips to add a third dimension of pig to the dish.

If you’re ever going to eat soggy chips, let this poutine be it. Poutine is a French-Canadian invention, so rich, tasty and calorific that it was probably invented for hangovers, much the same way kebabs were (although I can’t prove this fact). Basically its thick cut potato chips doused in rich beef shin gravy and a cheese and beer sauce. The whole thing was incredibly rich but oh so moreish! You can’t just help but keep coming back for more! The beef shin gravy was really delicious but it does get a tad salty after a while, which made me reach for my glass of water.


The fried chicken at Hartsyard has a reputation for being one of the best fried chickens in Sydney and I was delighted to discover that the chicken lived up to its high praise. The chicken is brined, smoked and  coated in a crispy, raggedy, double (yes, double) coating of batter. The flesh is well seasoned, juicy and succulent. There’s a drumstick, thigh and breast.  The fried chicken also comes with a buttermilk biscuit and a creamy, low country gravy studded with coarse chunks of sausage.  I have never been a big fan of American style biscuits (or scones) as I find them dense (at least the ones that I have tried).

The desserts, designed by Andrew Bowden (or Andy Bowdy, lord pastry master, as proclaimed on his Instagram page), are worthy of a trip to Hartsyard alone. Each week Andy Bowdy  comes up with a different soft serve flavour and a pie of the week. We wanted to order the pie and the soft serve but unfortunately we were informed that the pie is only offered on Friday, Saturday and Sunday, so we would have to return another day to try the pie.

Any Sydney foodie that has an Instagram account would have noticed that every second picture on their feed last Sunday would have been the Hartsyard x Blackstar Pastry crossover, watermelon cake soft serve, from the Newtown Fair. Unfortunately for me, whilst every foodie and their dog (so the saying goes) was enjoying this creation,  I wasn’t free that day, so I missed out.

Luckily for me, Hartsyard answered the call from Sydney foodies (which included those that were bummed to have missed out in the first place and those that just can’t get enough) and made the watermelon cake soft serve their special flavour of the week! The soft serve was served in a cone too (the one at the Newtown Fair was served in a cup). And it just so happened that we already had a reservation at Hartsyard!  We decided to order 3 soft serves to share between the 5 of us, seeing as the soft serve is quite large.
The watermelon cake soft serve consisted of an almond dacquoise soft serve, toasted pistachio, macerated strawberries, watermelon and rose granita and dried rose petals. As Black Star Pastry’s watermelon cake is probably my favourite cake in Sydney, did the soft serve version live up to the original? You bet it did! As soon as you take your first bite, you realise how remarkably similar it is to the cake. It was light, refreshing and you get that proven combination of strawberries, watermelon and rose. I think we all enjoy having familiar flavours,  especially when they are this good. Some at the table thought the soft serve was a bit icy, but I thought it was just right and a perfect ending to our meal at Hartsyard.

Highlight: The oyster Po' Boys are finger licking good! You will want to have more than one though.
Lowlight: Watermelon cake soft serve is only on the menu for one week.
Overall: You can pretty much forget about your diet if you're on one. The food at Hartsyard is resolutely American: big portioned, fried, rich, comforting and seriously delicious. You will leave well-fed, or in a food coma like we did! 7.5/10 (Great)
Hartsyard 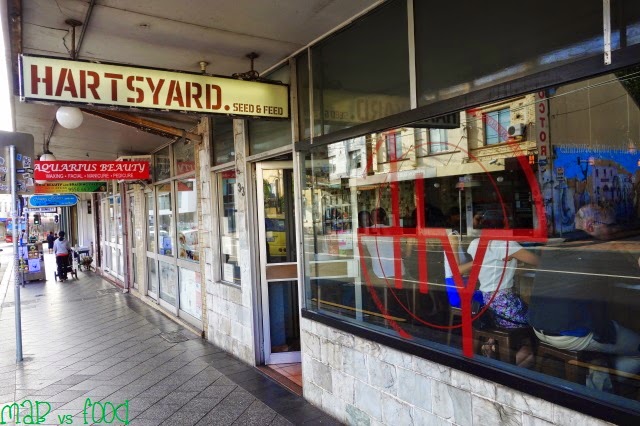