Did you know that truffles are widely thought to be an aphrodisiac? Apparently the scent of truffles is extremely similar to the male pheromone of pigs and humans and Napoleon was known to have eaten truffles to increase his masculine potency. So guys, if you're trying to woo a lady, be a stud and eat lots of truffle, cos that's what Napoleon did LOL!

I am not sure much success Napoleon had with the ladies but you have probably worked out by now that today's post is about all things truffle, that prized, mysterious, underground fungus whose flavour and aroma has capitvated foodies everywhere. The smell of a ripe truffle is just awesome, with its heady aroma perfuming an entire room when shaved onto food. And the intoxicating flavour! It's amazing and it's complex, kind of like trying to describe the flavour of a fine wine.

Some people like the summer but my favourite time of the year (at least from a food perspective) is between mid June and early September, when Australian black truffles are in season. One of my favourite snacks at home this winter has been truffle butter on toast. This truffle butter is produced by Duncan Garvey, the first person to grow truffles in Australia in the early 90s, and Pepe Saya, the makers of some of the best cultured butter in Australia. When you have two top artisan producers join forces, you know the result is going to be extraordinary. One of the best way to enjoy truffles unadulterated!

Sydneysiders had no shortage of options to try truffles at restaurants too with a number of them offering dishes showcasing truffles. Some restaurants even created entire menus devoted to the truffle (like Ormeggio's 3-course truffle menu for $120 or Rockpool's annual 7-course truffle degustation for $260, which I have yet to try but maybe one day!). It was impossible for me to try all of these but with my insatiable appetite for truffles, I did my best. Although I feel very satisfied now, I am now much poorer for it.

Now that the winter truffle season has pretty much drawn to a close, I would like to share my favourite truffle dishes for 2014. 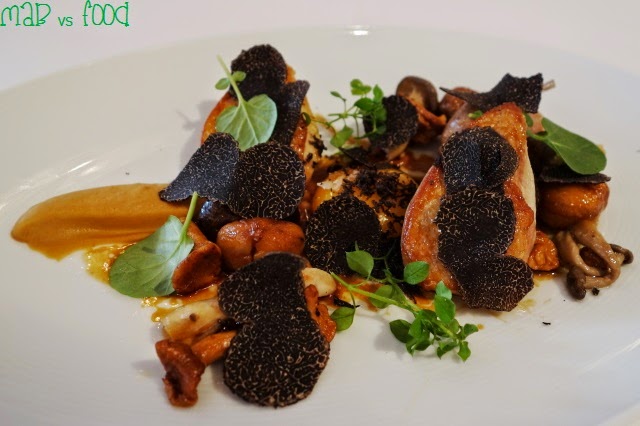 My favourite dish this winter was Est's quail dish with chestnut, mushroom, egg yolk and Perigord black truffles from Manjimup, Western Australia.  This dish was my main course in a 2 course lunch at Est. for $69 (+$15 for each course with fresh truffles shaved over the top).

The pan fried quail breast was cooked to perfection, with moist, succulent meat and a slightly pink centre. The quail jus was intense and packed a punch. The chestnut and celariac puree was amazing! It was sweet, smooth and so delicious! And the rich, runny egg yolk, which came seasoned with sea salt flakes and truffle shavings, brought the whole dish together. Every element in this dish accentuated the flavour of the truffle. This was truly an amazing dish, the kind of cooking that I am so used to seeing from the Est. kitchen! 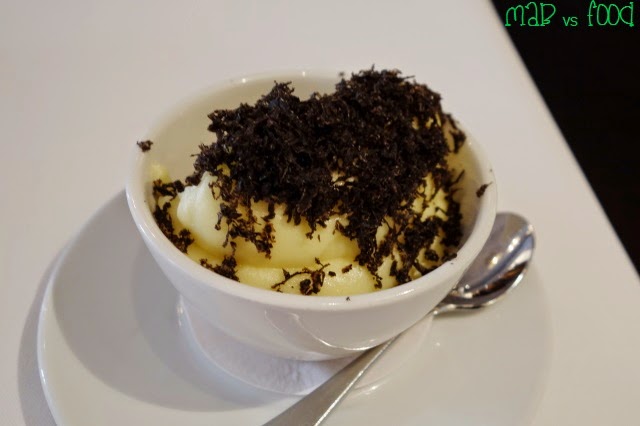 If the quail didn't make me happy enough already, the kitchen also sent out a complimentary mashed potato with HEAPS of shaved truffle on top! The mash was smooth, creamy and buttery,  in other words evil deliciousness! But it is these things that make mashed potato and truffles best friends. My palate was filled with intense truffle flavour, each spoonful was a foodgasmic moment. I may not have finised the mash, but you can be sure there was not a trace of truffle left. 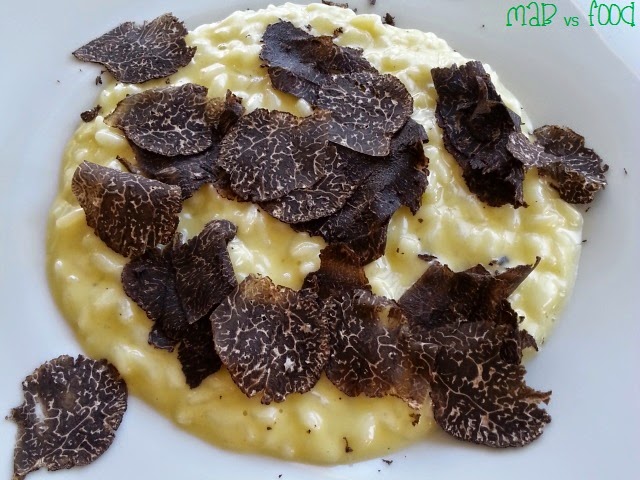 Est's quail dish may have been my favourite dish on this list, but Ormeggio's risotto with fresh black truffle from Tasmania and pecorino was my favourite truffle dish (if that makes sense). This dish was the main course of Ormeggio's 3 course truffle menu ($120). This truffle menu was the first truffle menu I tried this season and it was the best and most memorable, so don't be surprised to find a few dishes from Ormeggio in this list.

This dish was simple, but that's what makes this risotto such an incredible truffle dish. Nothing to get in the way, just pure, unadulterated truffle bliss! The smell of the truffle was pungent and had me swooning as the waiter placed this dish in front of me. The risotto, cooked delightfully al dente, was creamy, which brought out the earthy, heady flavour of the truffle. The flavour of the truffle just kept getting better as my mouth became coated with the creamy risotto. This is a dish that you definitely don't want to be drinking any water with if you want to savour the truffle flavour longer! This omelette from Rockpool Bar and Grill ($45) is the best omelette I have eaten in my life, period! There was so much truffle flavour in this dish. The eggs were infused with black truffle (from Manjimup) before cooking. The omelette was then served with more shaved truffle over the top and soft, fluffy brioche bread was spread with truffle butter. The omelette was soft and gooey, just the way I like my omelettes, and nicely seasoned with salt and pepper. 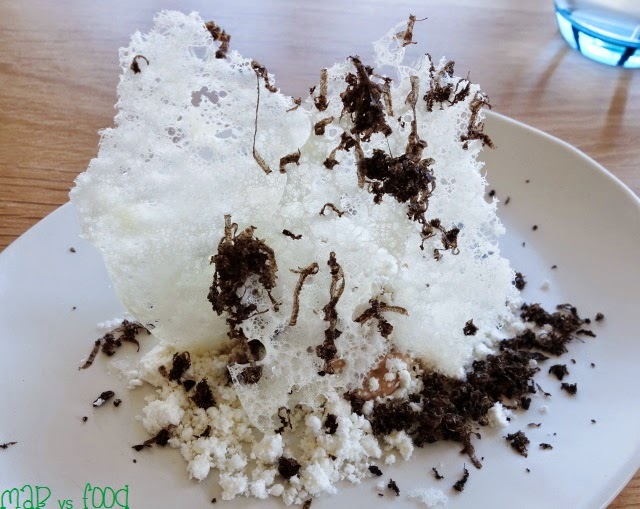 Looking like a snowy mountain, this was the dessert course in Ormeggio's truffle menu. There were milk crisps, a chestnut semifreddo, whipped cream, hazelnuts and shaved truffle (from Tasmania). I was surprised by how well truffles worked in this dessert and how the truffles brought out the flavours of the other elements in this dish, especially the chestnuts. This was a dessert that was on the "less sweet side", with clever use of savoury elements. 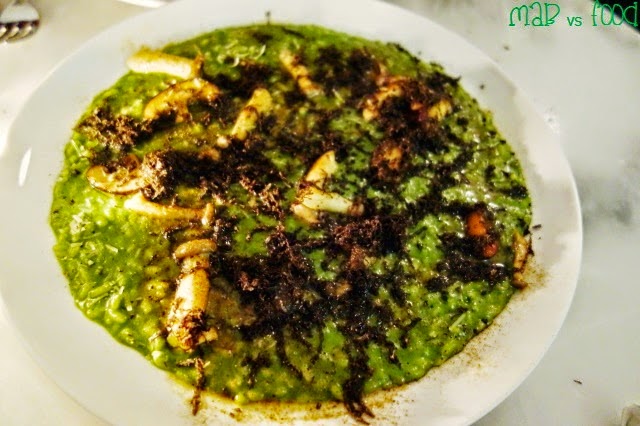 This luscious, green Carnaroli risotto with nettles, mushrooms with Perigord black truffles (from Manimup) was part of the 6 course chef's menu for $69 (+ $7.50 truffle surcharge per person) at the recently minted one-hat restaurant Osteria di Russo & Russo.

This is the first dish in my list where the chef came out of the kitchen to shave the truffles over the dish at the table. One of my favourite parts of a truffle experience (besides the eating obviously) is watching truffles rain on food and then getting a good whiff of the truffle aroma. Jason Saxby has worked for Alessandro Pavoni of Ormeggio (where I think you will find the best risotto in Sydney) in the past, so you know a risotto coming out of Jason's kitchen is going to be fantastic. I was in heaven with each spoonful of this rich, creamy risotto with its al dente grains of rice (maybe a touch too al dente, a minor technicality), which carried the intoxicating earthy flavours and umami of the truffle. 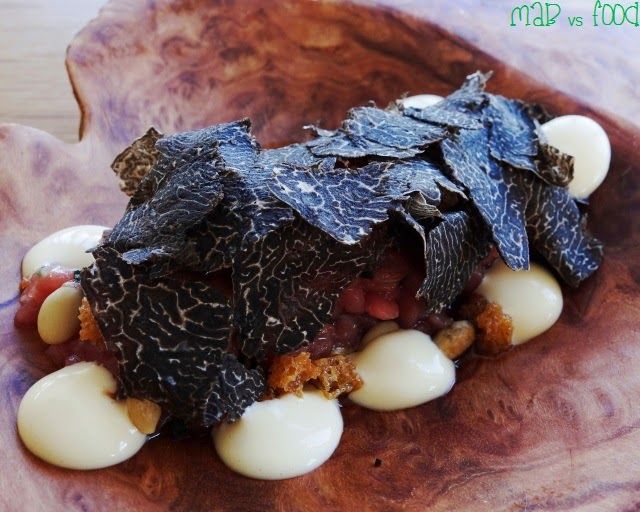 Coming in at equal sixth are the entrees from the Ormeggio truffle menu. Veal battuta is a dish I have had before at Ormeggio. It was fantastic before and since it was covered in a blanket of Tasmanian black truffles this time, it goes without saying that it was again incredible. The raw veal meat, pinenuts, anchovy oil, croutons, tuna mayo and truffles was a beautiful harmony of flavours. 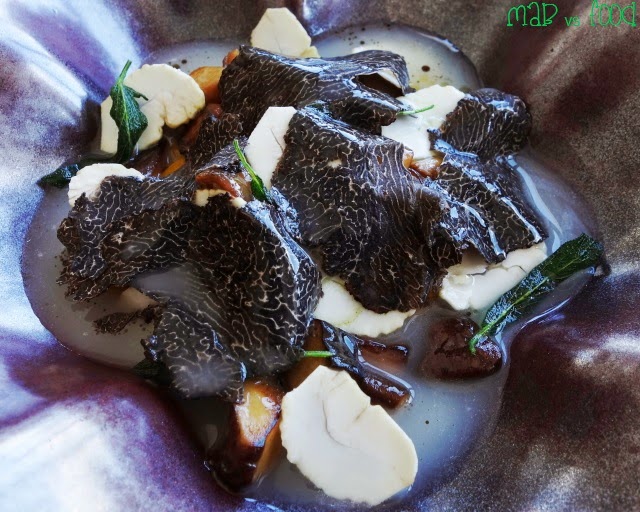 The pumpkin gnocchi, Tasmanian black truffles, mushroom, chestnuts, crispy sage leaves and parmesan consomme was my wife's entree in the Ormeggio truffle menu. The gnocchi were soft, fluffy and slippery nuggets of sweet pumpkin that were nicely contrasted with the sharpness of the parmsan consomme. This was another dish that would have still been great without the truffle, but truffle makes most things in life better, right? 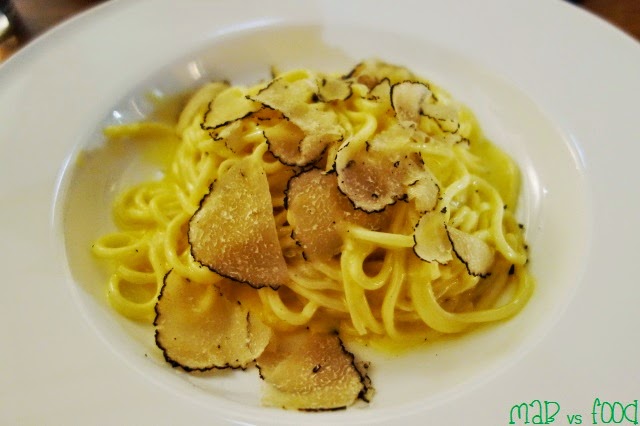 The taglioni with black truffle and parmesan was my favourite course in Balla's 4-course truffle menu ($120), a menu which I found to be a bit hit and miss.

This was another simple, yet delicious truffle dish. The taglioni pasta was fantastic and cooked al dente. The sharp, creamy parmesan sauce and black truffle combination is always a winner and is no different here. I detected some truffle oil in this dish, but not too much to overpower the flavour of the fresh truffles.

The black truffles from the Southern Highlands were chosen for their similarity to Italian summer truffle. They were dark on the outside, but possessed a pale, hazel coloured centre. The flavour of these truffles were different to the French Perigord variety more commonly found in Australian restaurants so I was glad I was able to try this variety; they had a lighter, sweeter flavour. 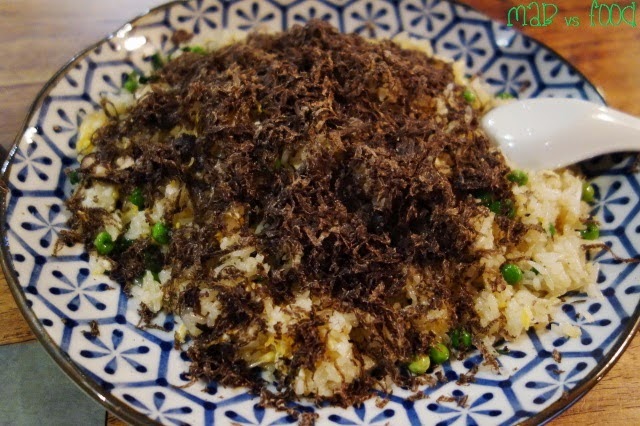 Mr Wong's truffle fried rice ($34) is like a Chinese version of black truffle risotto. The truffle to fried rice ratio was enough to make anyone's jaw drop. And there's no mistaking the smelly, intoxicating aroma and flavour of black truffle, which Mr Wong sources from Manjimup, WA. This was a very simple fried rice with egg, shiitake mushrooms, peas, butter and seasoned with salt and pepper to not overpower the truffle.

This was the best fried rice I have had for some time. But I have to say I prefer black truffle risottos due to its richness and creaminess, which makes it better at bringing out the awesomeness of truffles. 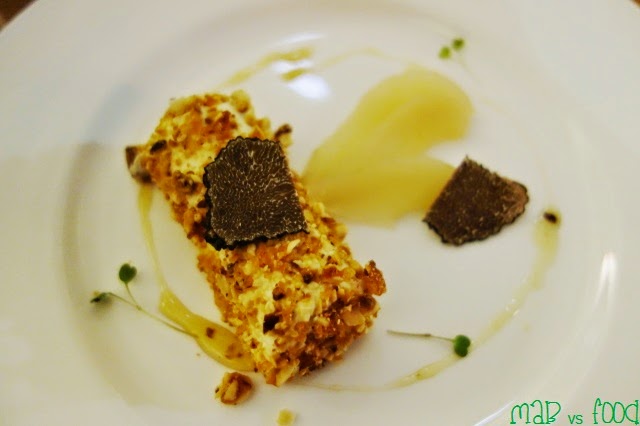 This vanilla semi freddo was the dessert course in Balla's truffle menu and was the only dish other than the taglioni that I truly enjoyed at Balla. The main issue I found with this menu was the use of different varieties of truffle which resulted in truffles of varying quality being used throughout the menu. In the other 2 courses, the truffle flavour was muted and almost non-existent.

Fortunately the night at Balla ended on a good note  with this vanilla semi freddo, which was packed with loads of truffle flavour.  The semi freddo was studded with crushed hazelnuts, which went well with the truffle. The truffle honey had quite a strong petroleum flavour, similar to truffle oil. And there were a couple of slices of poached pear on the plate, which I found to be a bit superfluous. 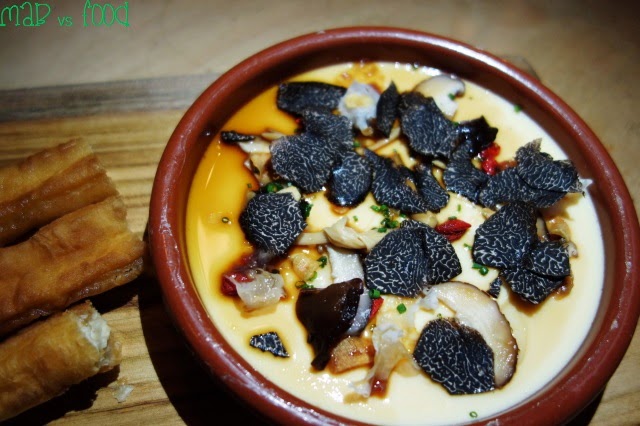 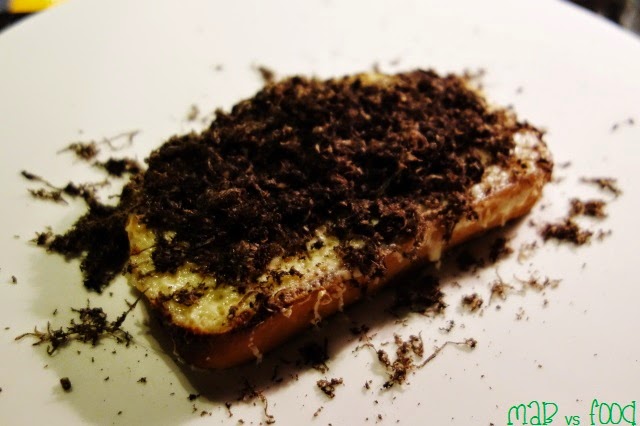 If I had to give a prize for most aromatic, best smelling truffle it would have to go to this truffle and cheddar brioche toasted sandwich from Rockpool's bar menu ($24). The smell was so intense and so good that I wish the above pictures were "scratch and sniff" so I could relive that moment when I smelt that truffle.

The truffles were also shaved in front of me, adding to the theatre. And they shaved ALOT of it too. But unfortunately the flavour of the truffle itself was quite mild. Oh well, at least the aroma was amazing.

So there you have it, that was my truffle season for 2014. Truffles, your time may be up for this year but we shall meet again next year :)