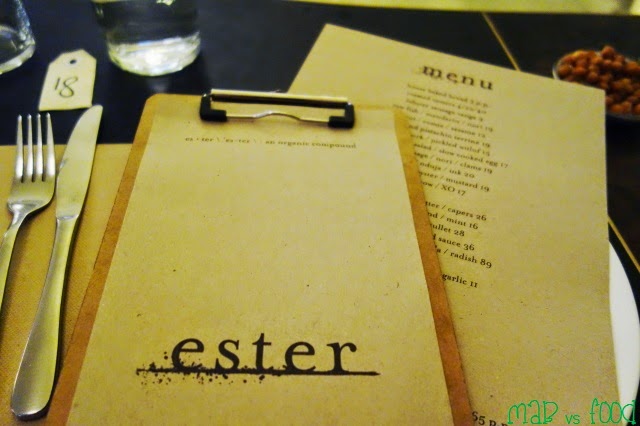 Despite being open for less than 12 months, Ester has quickly become one of the hottest and coolest restaurants in Sydney. It's the place to be in 2014 and everyone is coming for the same reason: the food that comes out of the large, domed woodfire oven, where all the magic happens. The menu comprises a selection of snacks, small plates and larger items from the wood fired oven, all of which are designed to be shared. 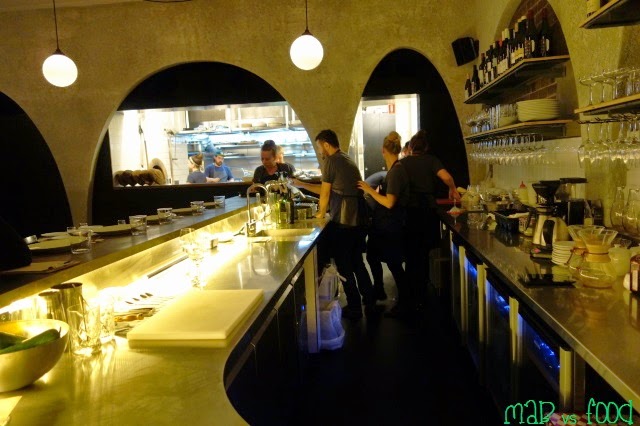 Ester is part of the Vini stable of restaurants/ wine bars that includes 121 BC and Berta. The head chef and the brains behind the woodifre oven based cuisine at Ester is Mat Lindsay (ex-Billy Kwong, Rockpool and 121 BC).

The restaurant is housed in a converted warehouse / garage space, with a semi-open kitchen at the rear and an understated dining room with dangling lights and dome-shaped archways. The bare room was buzzing on the night and my wife and I were lucky to secure a seating in the bar area during the 6pm session on a Friday night just a few days earlier. 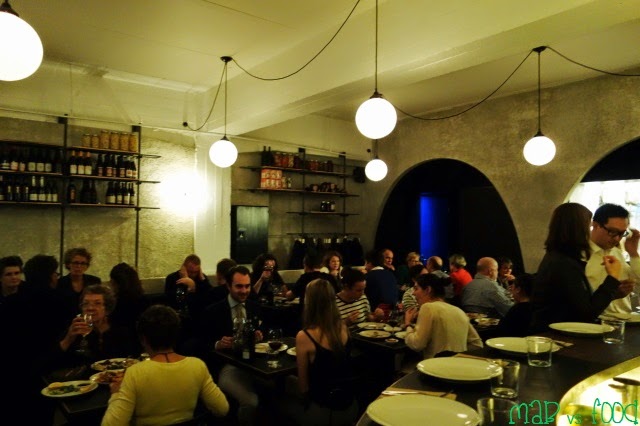 Ester already has made a big splash in this year's restaurant awards season, including winning both Best New Restaurant and Restaurant of the Year in Timeout Sydney Food Awards. I am expecting Ester to be awarded at least 1 chef hat and possibly New Restaurant of the Year in SMH Good Food Guide when the winners are announced Monday night (although Ester is up against probably the deepest pool ever this year with the likes of Cafe Paci, Moon Park, Cho Cho San and Nomad vying for new restaurant glory).

As I am dining with my wife, a vegetarian, this will probably be most vegetable-filled post ever on Ester. So be warned, you won't find any bone marrow here :P


While we perused the menu and sipped on wine and sake, we were treated to complimentary crunchy spiced chickpeas with sprigs of fried rosemary. These were addictive and I would be happy to have these as a bar snack anywhere / anytime.


The house baked bread is fantastic and has a wonderful crust thanks to the woodfire oven. This is a must order as you will need some bread to mop up your plates later.

Rock oysters were roasted in the wood fire oven long enough so the shells pop open, so no shucking is required. I usually prefer my oysters natural, but if cooked oysters were this good all the time, I might reconsider. The oysters were slightly warm and still had a texture similar to raw oysters; so you still get that wonderful slippery mouth feel and the briny juices. The oysters were finished with a nice and delicate horseradish mignonette that went well with the oysters.

The blood sausage sanga was one of the most popular items at Ester, but it has been replaced with a fancier lobster sausage sanga. Wow, what a bloody amazing bar snack this is! The lobster sausage was smooth and had a delicate sweetness from the lobster meat. The sausage is served on a square of fluffy steamed white bread with aioli sauce and caramelised onions. Best sausage sizzle ever! But one is not enough; I wanted to order more but I had to show restraint as we had barely started!


Ester's beef tartare is another dish that knocks it out of the ball park. I ate this in silence, savouring every bite. Chunky beef was mixed with chopped oysters (yes oysters!), capers, mustard leaves, grated horseradish and served with a creamy fried egg sauce. Even the house-made potato chips it came with to scoop up the beef tartare were fantastic (I had to bat my wife's hand away so she wouldn't eat them all!)As I was having this on my own, it was quite filling. But boy, did this beef tartare make me happy!


The roasted carrots were really delicious. They were tender, sweet and coated with sticky honey and sprinkled with sesame seeds. The carrots came with a rich, creamy comte cheese dipping sauce. This was my wife's favourite dish of the night.

Next vegetarian dish was a brussel sprout salad, which contained 3 different preparations of brussels: shaved, roasted and boiled. Hiding underneath the sprouts is a slow cooked egg, which predictably had a gorgeous, flowing egg yolk. The salad was also sprinkled with grated parmesan and we were instructed to break the egg and mix it all together.

This was delicious with the bitterness of the brussel sprouts going well with the acidity of the vinaigrette and the richness of the egg yolk. There were great textures too in this dish with crunchy roasted leaves and crispy fresh shaved sprouts. But this would turn out to be the least memorable of all the dishes through no fault of it own. It just wasn't as amazing as everything else.

Roasted cabbage with smoky, charred edges was tossed in a buttery nori sauce with big, juicy storm clams from  New Zealand. This dish could have easily been called "taste of the sea", because that's what it tasted like. The nori sauce was full of umami (great for mopping up with bread) and the clams had a nice sweetness. Amazing stuff really and one of my favourite dishes of the night!

Cauliflower comes as a massive half-head with charred bits from the firey breath of the woodfire oven. The cauliflower was smokey, tender, sweet and served with a creamy almond emulsion, chopped toasted almonds and a scattering of mint leaves (a brilliant pairing). There was enough acidity from lemon and vinegar to make this a well balanced dish. This was another highlight of the evening and probably the best cauliflower you will find anywhere.

Three milks may be inspired by the Latin American tres leches milk cake but it's nothing like it. There's a smooth, creamy cow's milk ricotta pannacotta, a rich, sweet goat's milk dulce de leche and a light-as-air sheep's milk yoghurt foam. Each component is nice on their own, but when eaten together, the dessert is just stunning, with each milk playing off each other beautifully. There's also some olive oil biscuit crumbs on the plate for texture and a few sprigs of rosemary. And at $11, three milks is a steal!

And lastly, we ordered a scoop of salted caramel semi-freddo. The semi- freddo had that delightful combination of sweet and salty that we all love in salted caramel. And the sprinkling of black sesame added a smoky note to the dessert. Yum!

Now I can see why Grant Achatz of 3-Michelin starred Alinea in Chicago almost ordered the whole menu at Ester when he was in Sydney last year. The food is just awesome and is not one to be missed. We were both full to the brim by the end of the evening  and at less than $60 per person for food, Ester is rather good value. Based on this meal, Ester is one of my firm favourites in Sydney.

Verdict
Highlight: Pretty much everything that's coming out of the wood fire oven. Seriously it's all delicious!
Lowlight: It's busy so it's difficult to get a table.
Overall: Ester is a very welcome addition to the Sydney dining scene. The wood-fire centric menu is amazing and the possibilities are endless, so I will be revisiting again soon. It's not fine dining, but who cares? The food is here is just as exciting as most fine dining places out there at the moment. 8/10 (Excellent) 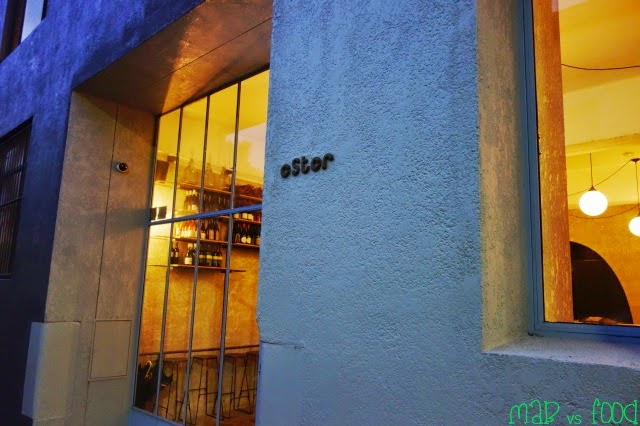