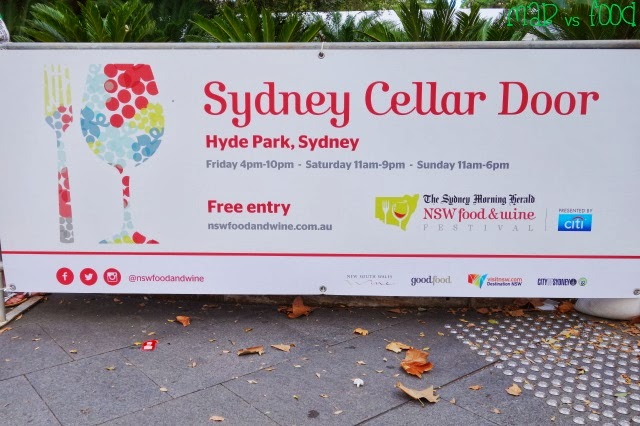 My wife and I decided to check out the opening day of the Sydney Cellar Door at Hyde Park after work on Friday. The focus of this show is clearly the wineries of NSW, which were laid out by region. So what does one do at this wine event? Eat all the food, of course hehe!

I really did want to eat all the food, but unfortunately I did not have sufficient stomach capacity. I think I hit the food wall after about 1 hour so here's what I did try: 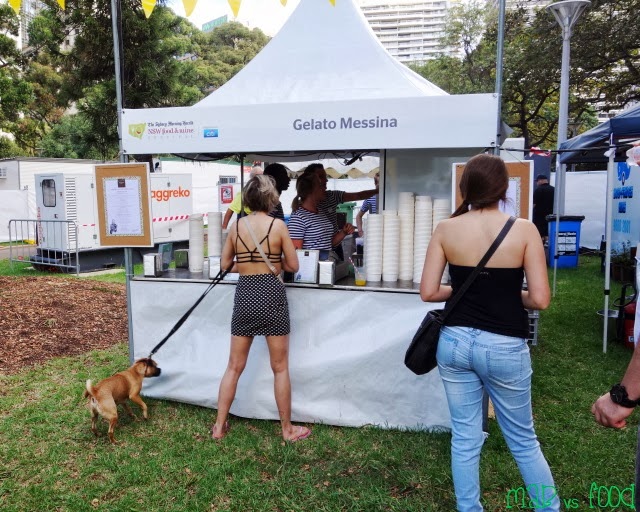 For whatever reason, my wife and I decided to do things in reverse: we would have dessert first than have savouries. Maybe we have been permanently scarred by the length of the queues snaking out of Messina stores on a Friday night so we thought we would beat the queues by having gelato at 5.30. Even the little doggy in the above pic kept pouncing at the stall like he/she wanted in on the gelato action!

Any way, Messina were doing a selection of sundaes and dessert cups, all of which have been infused with alcohol. There was the strawberry trifle and shirazzamatazz for sundaes, and how do ya like them apples? and just peachy for dessert cups. Sundaes were $9 and dessert cups $7.

After much indecisiveness, I decided on the strawberry trifle and just peachy. Strawberry trifle was very enjoyable and definitely the better out of the two. The strawberry trifle had a Gewurztraminer Zabaglione gelato (try pronouncing that heh, whatever it was it tasted yum), compressed strawberries, red wine jelly, chunks of vanilla sponge and some whipped cream on top.

The Just Peachy included three layers: champagne granita on top, then white peach gel and peach custard. We were told to try to have all three layers at the same time, but the problem was the spoon we were given was too big for the cup the dessert was served in, so it made for an awkward eating experience. Don't have too much of the champange granita in one bite, it does pack quite a punch of alcohol! 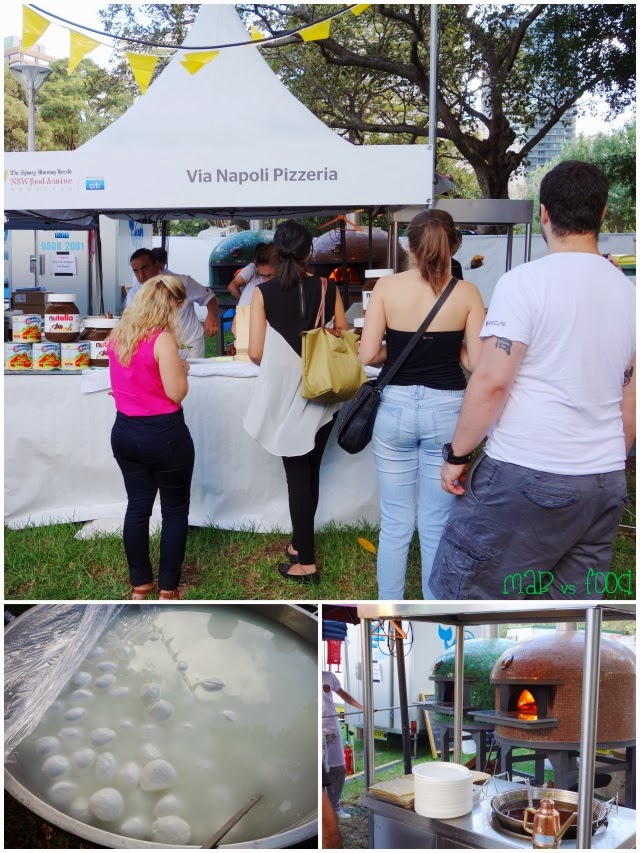 Next stop was Via Napoli. I might be the only foodie in Sydney to say that they've never had pizza from Via Napoli (I know, shame!). Well here's my chance. They even had 2 woodfire pizza ovens set up, a huge vat of buffalo mozzarella (yum!) and a deep fryer for the Panzarotto con Nutella (i.e. deep fried pizza stuffed with Nutella!)

Verdict? I thought this margherita pizza was quite good for an outdoor pizza. The pizza base was thin and crisp. And the ingredients were quality. It contained San Mazarno tomatoes, a nice buffalo mozzarella as well as the other usual suspects basil and olive oil. 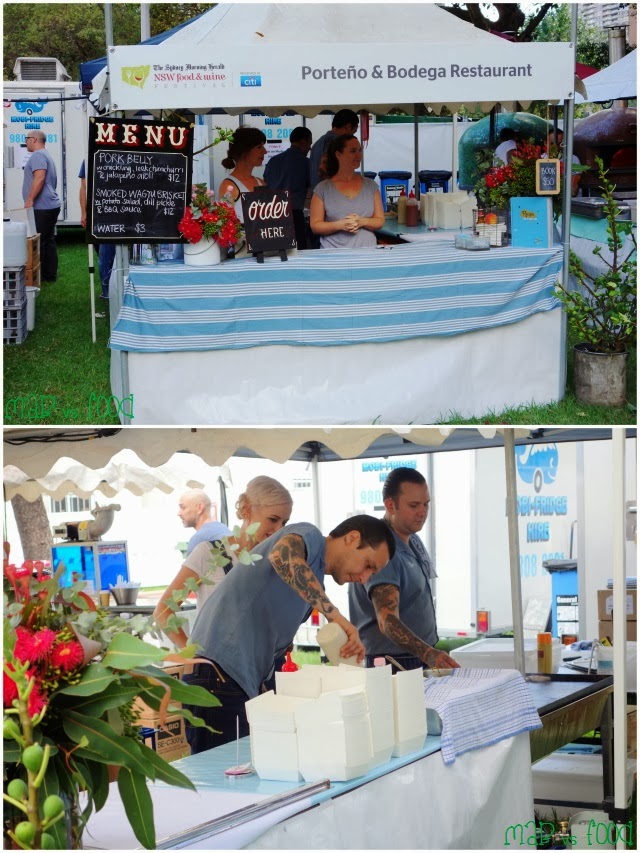 Next on my list was Porteno. The tattooed chefs and owners, Ben Milgate and Elvis Abrahanowicz, were on hand to barbeque the meats and serve the food. Porteno is another place that I have wanted to go but have neglected for a long time (the problems of taking a vegetarian wife to a restaurant serving big barbeque meats). 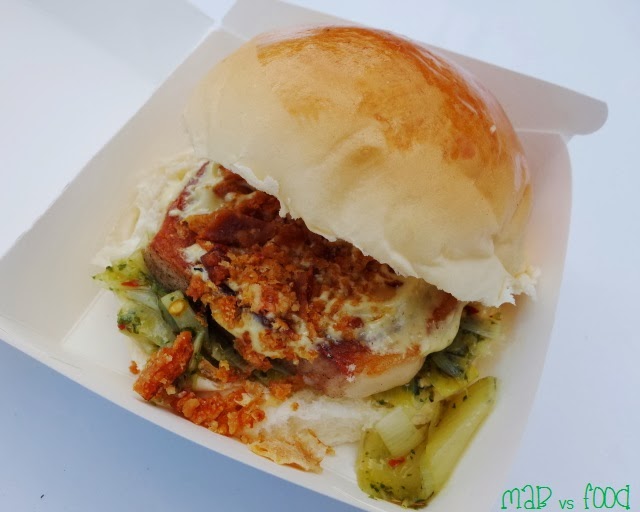 I decided to try the pork belly since I knew I would be trying beef brisket at another store later. First bite in and I knew that I will need to clear my schedule and grab some of meat eating friends and feast on some of Porteno's delicious signature spit roast beasts. Just  amazing! The pork belly was very tender and flavoursome and there was quite a lot of crispy pork crackling scattered over the pork belly. I loved the kick from the jalepeno aoli and flavours of the leek chimichurri. 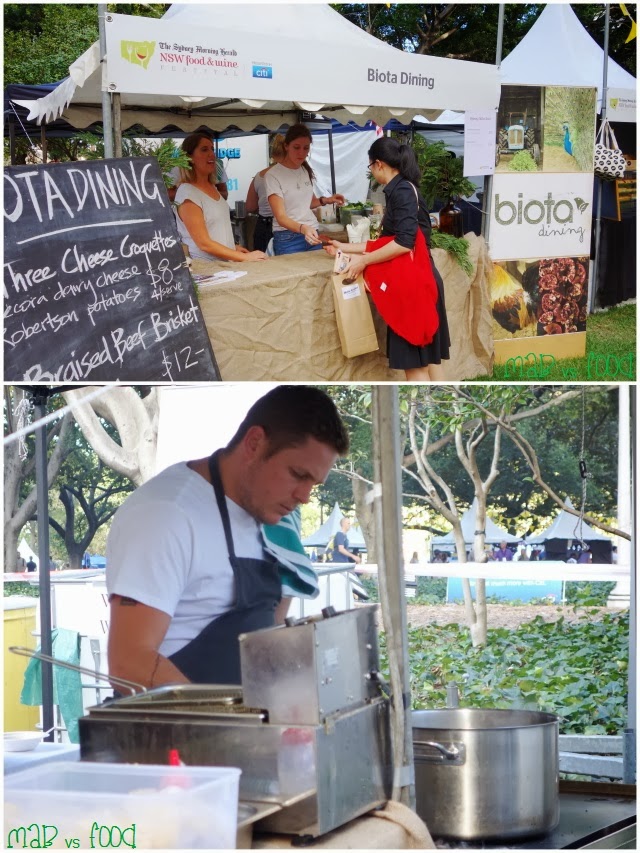 Next and final savoury stop was at 2 hatted Biota Dining in Bowral. Biota is another place that I have not been to (seeing a trend yet?). Executive chef owner and chef, James Viles was also around to serve the food. It was great seeing so many notable chefs out there supporting this event and the local wineries and producers.

As if I needed another reason to drive to Bowral to dine at Biota (I have already sampled James Viles' food at another event, Land vs Sea at Ormeggio). The beef brisket was just delish and had a good dose of smokiness! The brisket went well with the aoli sauce and was served in a buttery brioche bun.

And finally, I presesnt you with these glorious three cheese croquettes. These were the best tasting things that I tried today and that's saying a lot because I had some really good food! Just to die for! Very crispy batter encasing a warm, softy, creamy, addictive and delicious cheesy, potatoey thing. I could easily have a bucket of these!


I promise, I will make it to Biota this year hehe!

I was well and truly in a food coma by now so we decided to take a walk to burn off all those calories and here are a few other food stalls that caught our attention:

Regional centres like Orange and Mudgee were also a focus of the Cellar Door. On hindsight, I probably should have grabbed one those Orange regional tasting plates with some fresh fruit and veggies after all the meat I had eaten!

Thought I mention Bar Pho. I was really keen to try this place before going, to try their pho (of course). But guess what, there was no pho:(, they were only serving banh mi (pork roll) and goi ga (chicken mint salad). Bar Pho has a stall at the Bondi Farmers Market on Saturdays, so I might need to get myself to Bondi to try. 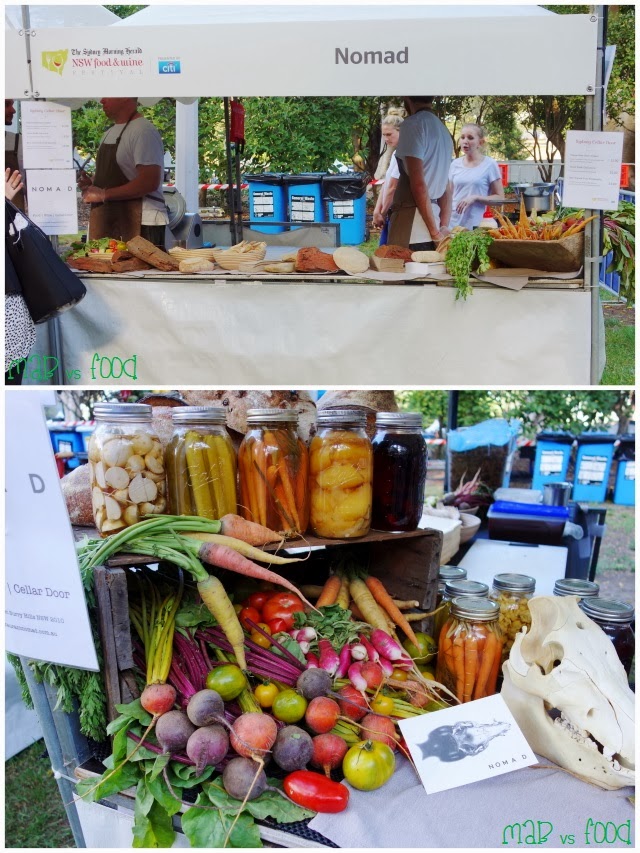 Unfortunately I did not get to try out anything from Nomad (just a matter of lack of stomach space). They were taking up 2 stall spaces and the space was so nicely decorated too, which made it more of a shame I didn't try something. I will make up for this by visiting the restaurant hehe. Nomad is known for curing meats, pickling veggies and aging cheeses in house so I am sure their chacuterie plate would be awesome!

And on the way out, my wife decided to grab this bite-sized mini strawberry delight cheesecake from Restaurant Cuvee. I had never heard of Restaurant Cuvee until now. They are a restaurant located in the Polkobin winery, Peterson House. I personally found the cheesecake a bit rich and heavy, but this is likely due to the food coma I was in. My wife didn't find this to be a problem. The cheesecake also had a subtle strawberry flavour.

And that's a wrap! Both my wife and I found that the Sydney Cellar Door had better eats than other similar events in the past. Most items won't set you back more than $12, so we didn't find it overly expensive either. If anyone is looking for something to do this weekend, grab a few friends and head to Hyde Park. You will have a great day out of food (and wine, after all that's what the Cellar Door is for).