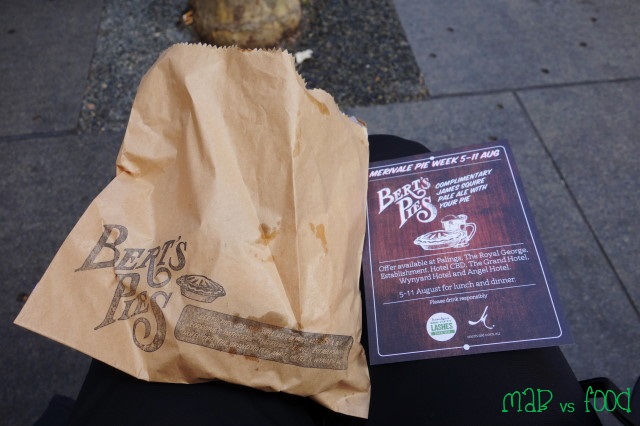 It’s Pie Week at Merivale. That means free pie for me today!

Merivale have decided to get their fingers in more pies (again) and have just launched Bert’s beef pie and Bert’s pork and fennel sausage roll, which are now available at various Merivale locations for either take away or dine in. Apparently these pastries have been developed after weeks of testing in the kitchens of the 3-hatted restaurant, Est, under the watchful eye of head chef Alex Woolley. It goes without saying that my expectations are high for Bert’s Pies with this sort of talent working on creating the ‘perfect pie’.

To mark the launch of Bert’s Pies, Merivale are (generously?) giving away free Bert’s beef pies (see the end of the post for details on how to score a free pie). Today the free pies were being dished out at Hotel CBD, which is where I headed for today, and at Lorraine’s Patisserie. Do expect to queue though, since it is not likely Sydneysiders are going to pass up an opportunity for a free lunch during these tough economic times. I got there just before midday and there were already around 20 to 30 in the line.

So was the pie worth queuing up for? Absolutely, it was free! In all seriousness, Merivale have been able to create a great product.


The best part of the pie is by far the pastry. The pastry was so flaky and buttery. So delicious! It wasn’t just the top that was flaky. The base of the pie crust was flaky too and not the short crust usually found in pies. And check out the colour on the top of that pie. That’s a lovely golden brown coating of egg wash! Merivale have really nailed the pastry component of the pie!

Inside the pie was an enjoyable beef stew with some tasty, sizeable chunks of beef. I was quite surprised with how big some of these chunks were. You could definitely tell that you were eating some proper, quality meat here. I did find a few of the chunks of meat to be slightly dry, but this did not detract from my enjoyment of the pie too much.
So what’s the not-so-good? The biggest issue with this pie is that it is such a messy pie to eat. The best part of the pie, the flakiness of the pastry, is also the cause of this. My advice is to eat this pie inside and grab a plate and some cutlery. Don’t eat this one on the run! The flakiness of the pastry made it difficult to grab a good hold of the pie without the pie falling apart and creating a mess everywhere. Pastry crumbs were falling all over my trousers and onto the floor. I was getting gravy and tomato sauce all over my hands and some on my trousers too unfortunately. I guess that's part of the fun of eating a meat pie...

And I am sure that I got some on my nose too. I swear I could smell buttery pastry (yum?), tomato sauce and gravy for the rest of the day. Maybe it was psychological and my mind telling me that I need to get another pie? Or a sausage roll, perhaps?
So is this the best pie in Sydney, as Merivale seems to be marketing this as? While this is a very good pie, I wouldn’t be crowning it the best in Sydney. I can think of at least one pie off the top of my mind that I would want to have more and that is the lamb shank and red wine pie from Black Star Pastry in Newtown. But that’s all the way in Newtown so I would be happy to have Bert’s pies for my lunchtime pie fix during the work week.
Verdict
Highlight: That flaky pastry. I may have been getting crumbs all over myself, but OMG that pastry was so delicious! Plus the pie was free!
Lowlight: This is not a pie to eat on the run. If you decide to do so, which I did, expect to make a mess!
Overall: Bert’s beef pie is definitely a well-executed and tasty version of the humble meat pie. Is it the best pie? Probably not, but it is certainly worth seeking out (and joining the line early to make sure you can get the free pie this week).


HOW TO GET THE FREE PIE 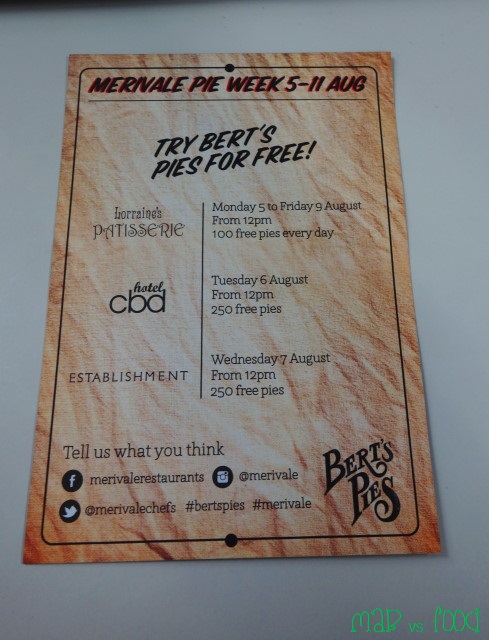 I am sure most of you have already heard about this promotion and many of you have already lined up. But just in case you haven’t, there are not too many chances left to get your free Bert’s beef pie. Establishment will be giving away 250 free pies tomorrow (Wednesday 7 August) from midday. Lorraine’s Patisserie will be giving away 100 free pies from midday from Wednesday to Friday (7 – 9 August). Obviously you will need to be quick, after all it’s a free pie and there are a limited number. Might be a good idea to line up early.

If you miss out on the freebie, the beef pie is $7.90 and the sausage roll is $4.50 from Lorraine’s Patisserie. The dine-in version of Bert's beef pie comes with mash, peas & gravy and is priced at $18.00 when you go to Hotel CBD (I have been informed that the pie is $15 at the Royal George or Palings, so probably best to go there if you want the pie). The sausage roll is $8 to dine-in (except at the Royal George where it is $7.50). Check the menus on Merivale's website for exact prices as there seems to be differential pricing across the different venues.