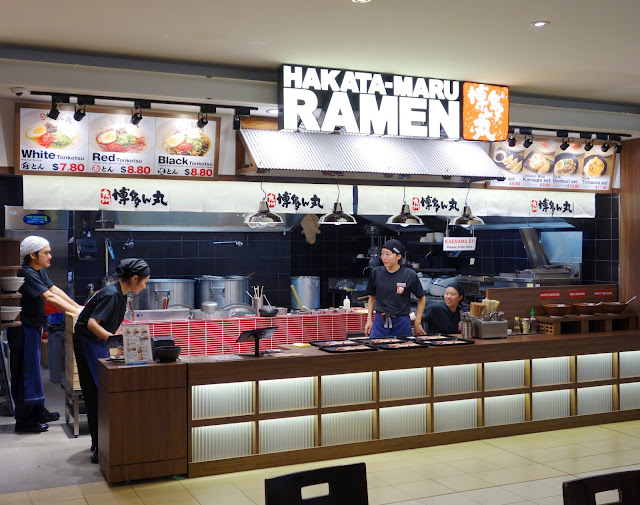 Ramen stores seem to be opening in Sydney quicker than I can get to them with Hakata-Maru Ramen (Shop 3 Level 3, Market City, 9-13 Hay Street) being the latest ramen store opening. Hakata is yet another ramen store to be found in a food court in Chinatown, joining Ramen Ikkyu and Gumshara Ramen, both of which are my favourite ramen stores in Sydney. The big question is will Hakata-Maru Ramen become a food court favourite like Ikkyu and Gumshara?

Hakata-Maru Ramen is the first store of Toridoll, a large Japanese noodle chain more famous for their Marugame Seimen udon shops in Japan and other stores throughout the world. The ramen served here are Hakata style. As such the noodles are thinner and the tonkotsu (pork bone) broth is also thinner than the likes of Gumshara and Ikkyu.

Today I decided to order a set with the Black Tonkotsu, which is the tonkotsu broth topped with garlic oil and garlic flakes, and a side of karaage chicken wings (for total price of $10.80). This is very reasonably priced and is cheaper than many of its counterparts.  I think this will be Hakata’s biggest strength that will keep people coming back.

The tonkotsu broth at Hakata is actually quite a light broth and a lot like Ippudo’s. This will please those people that aren’t a fan of the thick, heavy feel of collagen on their lips. Despite being a thin broth, the broth still delivers loads of enjoyable porky flavour. However I do prefer the thicker style of broths served at Ikkyu and Gumshara as they pack more of a punch. The garlic oil gives the broth more depth of flavour than the original tonkotsu broth, however I can’t help but notice the small drizzle of garlic oil I got in my bowl. I have noticed that other bloggers have received a much more generous serving of garlic oil.
I understand that the noodles are made in the store using ingredients imported from Fukuoka. The noodles had bite to them although they weren’t as bouncy as I would have liked. This is partially my fault as I should have specified to the staff that I wanted my noodles firm.

The toppings (which consisted of two pork slices, half a boiled egg, wood ear mushrooms and shallots), is where, in my opinion, Hakata does not rate as well as the better ramen stores. Whilst the pork slices were quite tender and tasty, there were not much of them to go around with only 2 bite sized portions. The boiled egg, a ramen staple, was quite nice though, with its soft egg white and warm, gooey yolk. Next time I go back to Hakata I know that I will need to order more extras. Perhaps this is the trade-off for a cheaper bowl of ramen?

I found that the serving size of the ramen is quite a bit smaller than at other ramen stores. This is where ‘kaedama’, extra noodles comes in. For an extra $1, you can help yourself to another serving of noodles, which I definitely needed as I felt a bit hungry after finishing my initial serving. The portion of the ‘kaedama’ was quite big and it seemed like there were as many noodles here as what I was originally served. This time I remembered to order my noodles al dente. The noodles were indeed al dente, so I was happy and satisfied after finishing another bowl of my favourite comfort food in winter.

Verdict
Highlight: The price. The quality of the ramen is great and cheaper than most other places. The ramen is similar to that served at Ippudo at half the price, so I know where I will be going out of the two.
Lowlight: The servings are quite a bit smaller at Hakata compared to most ramen places. Toppings not as good as the better ramen places.
Overall: Hakata-maru Ramen serves up great, satisfying bowls of ramen in the Market City food court. The biggest draward for Hakata is the lower price compared to the likes of Gumshara and Ikkyu, however Hakata will have to play second fiddle to both of them. 7/10 (Great)