After a long day at the gloomy DMZ, then wife and I booked a dining experience at the glamorous French fine dining establishment, Pierre Gagnaire a Seoul at the Lotte Hotel in downtown Seoul.  The restaurant is located on the 35th floor of the New Wing, so the setting of the restaurant was much nicer compared to the rest of the hotel which looked a bit tired. Pierre Gagnaire was rated as the 6th best restaurant in Asia according to the Miele Guide, which is based in Singapore. 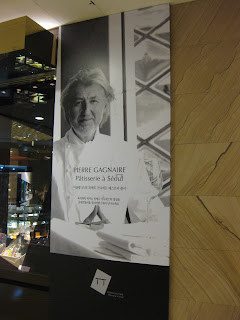 Pierre Gagnaire is an absolute superstar in the culinary world so it would be an understatement to say that I was looking forward to eating here and spending my Korean Won. In addition to his flagship restaurant in Paris (which of course has been awarded 3 Michelin stars for many years and consistently one of the top restaurants on the San Pellegrino list, which I think is rubbish, but that is a story for another day), Pierre Gagnaire has been building a bit of a restaurant empire around the world, but not at the same pace as Alain Ducasse (another culinary genius) and Gordon Ramsay. In Asia, he has restaurants in Tokyo, Hong Kong and Dubai, all of which bear his name. I have read that he visits the Seoul restaurant about 3 times a year, but unfortunately he was not there on the night.

Pierre Gagnaire is known for being far from conventional, an inventer and perhaps bordering on crazy according to some.  He explores the science behind textures and combinations of different food ingredients. He often introduces combinations of flavors, tastes, textures and ingredients that have never been attempted before. So he is kind of daring and bold, yet pulls of everything with subtlety and skill. 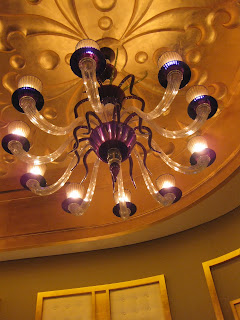 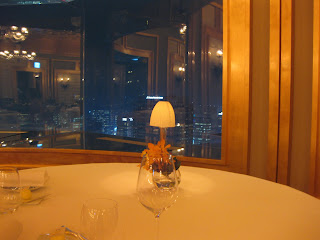 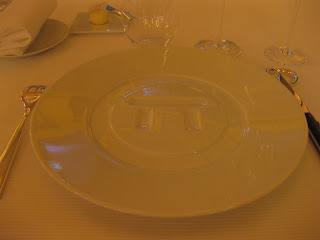 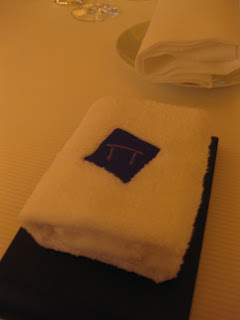 The restaurant setting is worth a million bucks (or a billion won). The décor is nothing short of amazing and glamorous. The restaurant also features four private dining rooms, each with its own theme and beautifully decorated. Apparently the theme at the restaurant is the “Secret Garden of the Palace of Versailles.” Gagnaire himself was actively involved in interior design and decoration, selecting not only accessories but also all the silverware, glassware, chinaware and linen from Paris and Milan. The views of downtown Seoul and Bukhan Mountain are spectacular and breathtaking! We got the table against the table so we spent the whole night starring out the window in awe of the amazing views. And of course, the food here is just as good as the views, as you will find out.

The service here is very professional. At first I felt a bit overwhelmed at attentive the service was. The staff is almost entirely Korean (there was one French waiter). The food here is also nearly all sourced from Korean farmers and fisherman. This is due to South Korea’s strict food import regulations make it difficult to bring produce in from Europe (I believe his HK restaurant is predominately European ingredients since you can’t grow anything there).

We decided to go for the l'esprit de Pierre Gagnaire menu. In short, this menu consists of 4 courses, each with multiple small items. You get an amazing variety of tastes and textures - some classic and some very experimental. 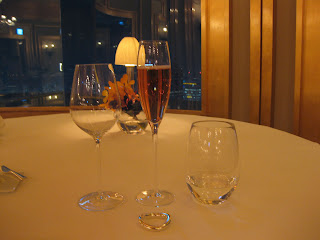 When we sat down the sommelier wheeled out several bottles of wine / champagne and asked us which one we wanted. Given the way the wine was brought out to us, it was very difficult for us to refuse so we went with the rose. It was about $A30 a glass, probably the most expensive glass of wine I have ever had! 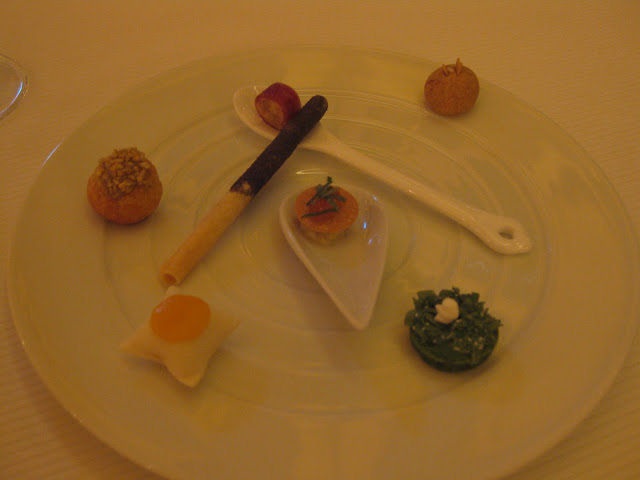 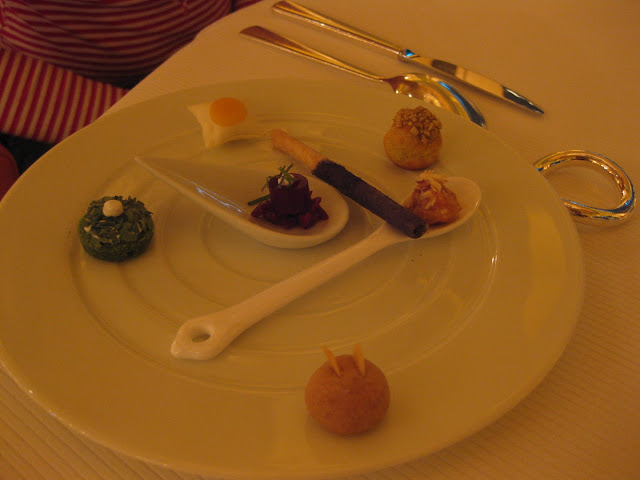 So here is the amuse bouche, but unfortunately I don’t quite remember what most of these parcels of goodness are, so you will just have to admire how beautiful they look on the plate.The cigar looking thing is seaweed powder coated stick, filled with anchovy cream. The pillow with the yolk looking thing is souffle with cumin cream and Mimolette cheese. The green one is arugula cake. 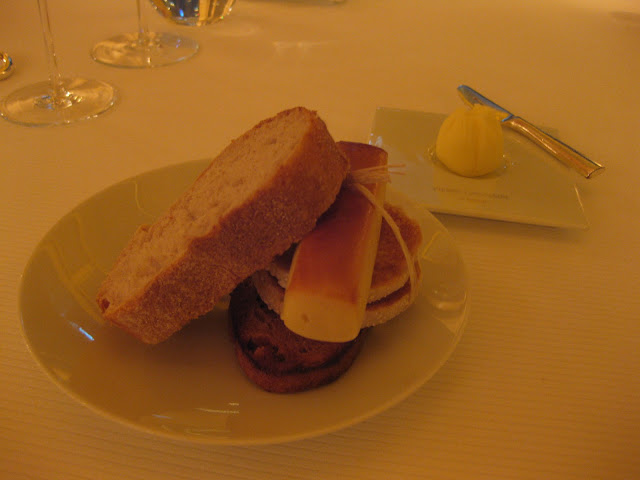 The pocket cocktail is a series of mini entrees. I was astounded with the variety. Due to the sheer volume of dishes we both got, I can't remember everything we got - so I have done my best. My favourite dish was the onion soup, a French classic. The French are so good at soups. Full of flavour and creamy.

The main course for me was lobster, the hero of the course, which was well supported by lobster bisque and lobster mousse. At this moment, I am ready to declare this the best course I have ever eaten at a restaurant anywhere in the world. I still dream about this course (yes, I do dream about food!). Perfectly cooked morsels of lobster. Mango goes perfectly with lobster, why didn’t I ever think of that! Simply exquisite, I am lost for words. No words could do justice to how great this lobster was. Then the lobster bisque. OMG! So delicious. Powerful lobstery (is this a word?) flavour, creamy and not too heavy. Goes so well with the rice - an Asian influence I am sure. I could drink gallons of that bisque, except I probably get a heart attack and end up in a food coma, literally.

Nothing beats a perfectly cooked soft poached egg with warm oozing yolk and truffle! Classic combination.  My wife found this to be a very enjoyable course.

This is not your typical cheese course and is probably the most experimental dish of the night. This was a perfectly executed dish. What an amazing cheese course indeed! I don't like Gorgonzola normally, or most cheeses for that matter; the fact that I loved this shows how good it really is. I was amazed at how light and not over powering the Gorgonzola was. 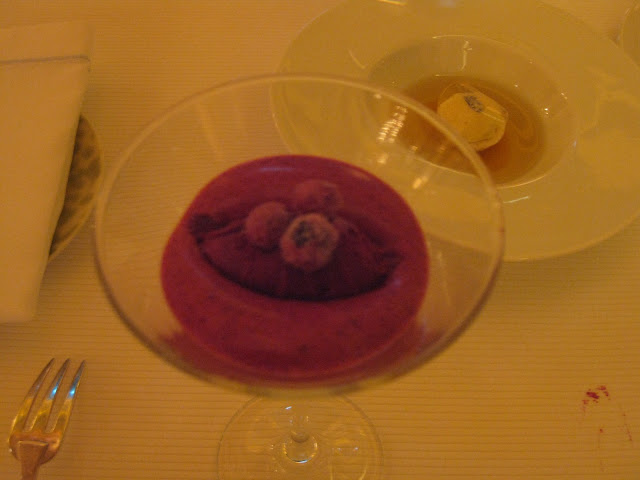 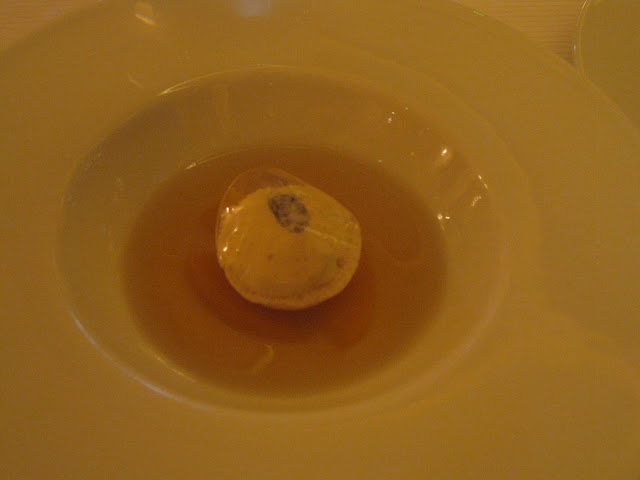 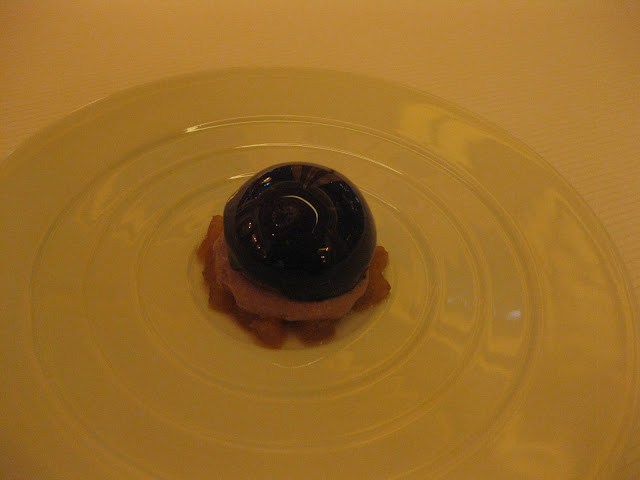 The chocolate was definitely my favourite out of the three. It was so delicious! Chocolate mousse was light (how a good mousse should be) and it was wonderfully paired with pear and hazlenut. 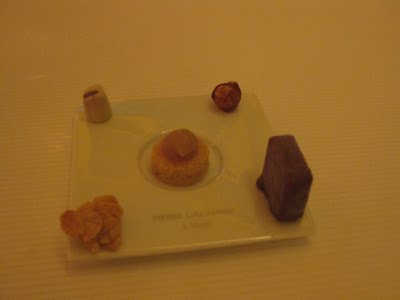 Our meal was finished off with these delicious bite sized treats. Again I don't remember what these are exactly as they went down quicker than you can say 'petit fours'!

On the ground floor of the Lotte Hotel, the patisserie Delica Hans serves wonderful pastries and cakes made in the Pierre Gagnaire a Seoul kitchen. Our hotel was about 5 minutes from the Lotte Hotel so we made 2 separate trips to sample Pierre Gagnaire's amazing pastries (yes we eating Pierre Gagnaire food on 3 nights out of the 7 nights we stayed in Seoul). These are the best pastries that I have ever eaten! Nothing in Sydney comes close.

The choc mousse in the opera cake was light like a good mousse should be. The sesame eclair was an explosion of sesame flavour. A delightful pastry

The Tropezeine was a beautiful brioche with lots of cream :9 All the macarons very good but the yuzu one was awesome

Verdict
Highlight: The lobster course, which might be the best course I have had in any restaurant in the world!
Lowlight: There was a bit of confusion at the start when we queried about what my wife would be having due to her vegetarian diet. We definitely informed the restaurant of this when the reservation was made but they seemed to be caught off guard by it. I thought they would have been prepared, but fortunately they were able to come up with something that was amazing for my wife.
Overall: A modern French fine dining establishment that is worth the splurge for special occasions. The food here is creative and flawlessly executed. 9/10 (Outstanding)